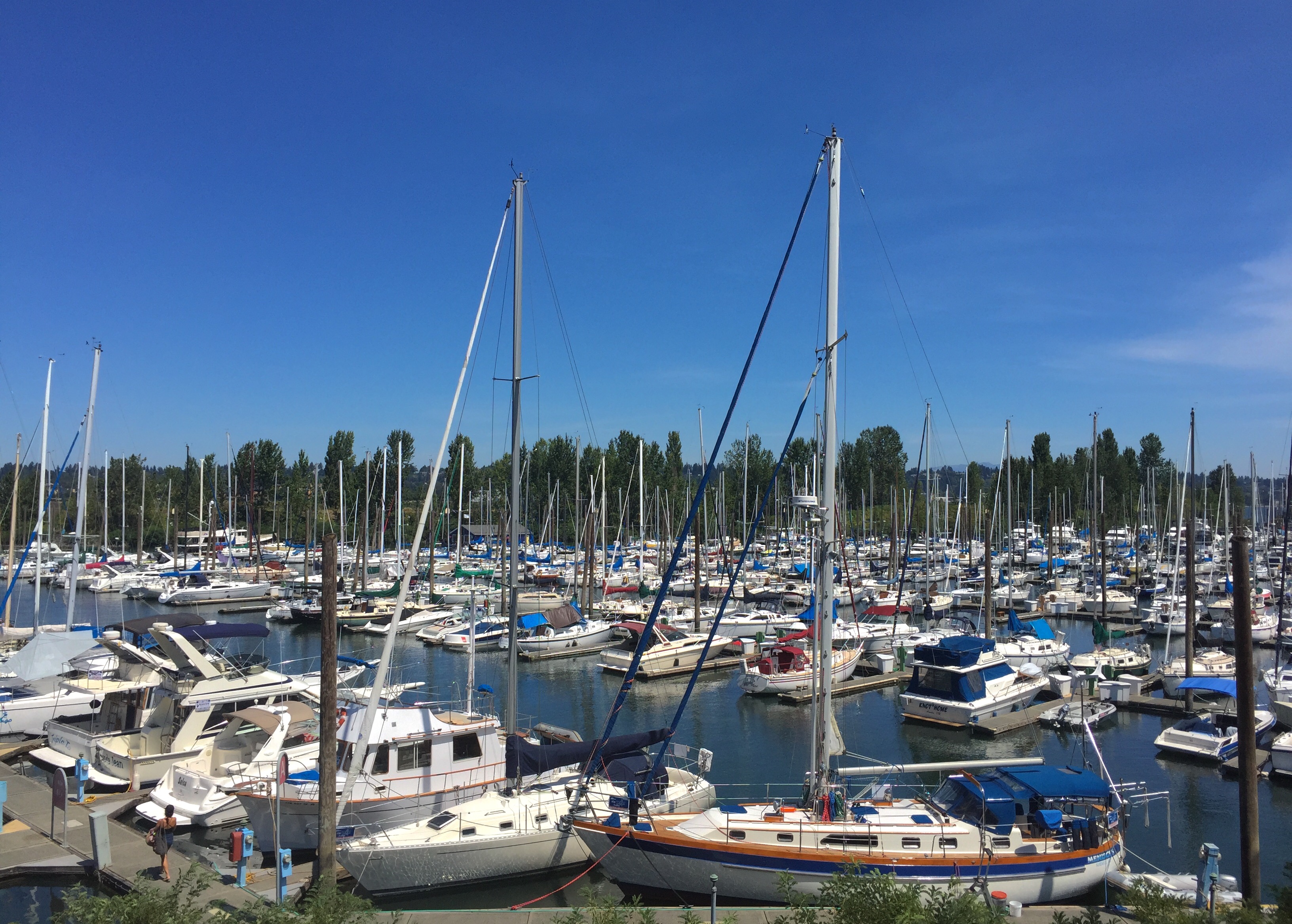 So what do you do if you want to buy a sailboat and sail around the world, but you’ve never, ever, not even once been on a sailboat before once in your life?  Take sailing lessons of course!

My partner and I have talked about how awesome sailing around the world sounds ever since we first met.  It just so happened that a few months ago we were sitting in our favorite wine bar, chatting with the bartender and she told us that she had just taken sailing lessons!  I’m really not sure why we hadn’t looked into options for sailing classes before, but we got really excited and looked up the school right away.  Thanks Melissa at MBar!

The school is called Passion Yachts, and is based right on the Columbia River in Portland.  They offer a variety of ASA (American Sailing Association) courses and certifications, which is great because that means they’re recognized internationally; so in addition to learning to sail, we’d get credentials and be able to charter a boat anywhere in the world.  We signed up for ASA 101 – Basic Keelboat Sailing.

The class was held over two 8-hour days and we were given a book to study before hand, Sailing Made Easy.  A couple of days before the class I finally got around to reading the book.  Not being familiar with boats at all, I had a lot to learn!  There was so much terminology, parts of the boat, points of sail… it was a bit overwhelming, but with some rote memorization of terms, the more I read, the more it began to make a little sense.

On the first day of class, we met down on the dock, in a small classroom.  Our instructor was Dee.  A spritely retired woman who absolutely loved sailing and had spent years cruising around the world with her husband.  They were now settled in Baja in the winter and spent summers in Oregon while she taught at the sailing school.  Also in our class were an odd pair of men – an older British gentleman who looked and talked just like a sailor, and a younger friend of his.  It turns out the British gentleman owned a 50+ foot sailboat that was currently down in the Caribbean, he had been sailing for years and been around the world and back multiple times!  Why the heck was he taking sailing 101?!  Well it turned out that even though he had been sailing for most of his life, he had never been certified and his insurance now required him to have a certain number of certified crew on board.  So, in addition to having an almost private class, we got to hear lots of sailing stories.  Probably too many sailing stories…  I’m not sure if there was ever a quiet moment during class, he had a story for everything, and talked and talked away, it was like being in a pub with an old sailor reliving all his adventurers at sea.  Very entertaining, but we also wanted a chance to pay attention a bit in class!

After spending some time in the classroom going over the basic parts of the boat, points of sail, maneuvers, wind and a few other things we headed out the sailboat.  I was happily surprised that we had a Hunter 30′ boat to sail on.  I was expecting a small keelboat, but this would be much more similar to what we actually hoped to sail!  And it also provided some shelter from the rain.  While the Pacific Northwest was in the middle of the hottest summer ever on record, we somehow ended up with the first rainy weekend in about 3 months!

We practiced maneuvering the boat under motor in the marina – backing out of the slip, turning around, stopping, anchoring and docking.  It was still raining, but we headed out to the river.  There was very, very little wind, but we worked with it and used a little motor here and there when we needed to.  We practiced tacking, jibing, trimming the sails and man-overboard.

During one of my turns at the helm (steering wheel), we actually got a good wind, the boat heeled over and we started really moving.  Now, I must not have gotten to that part of the book yet, because in my sailing naiveness I did not know that the boat was supposed to heel over on its side as it was sailing along.  I thought I was about to flip the boat over!  While Dee was instructing the guys on how to trim the sails with the wind, I was urgently asking her what was happening and how to stop it from tipping over.  Well, it turns out that you hold your course and this is how you sail… But I was freaked out and Dee told me to head up, and the boat rocked back to a less threatening angle.

The next day, we met in the classroom.  We learned to tie a few knots – they were actually surprisingly simple once you mastered them, and very useful and strong!  We also learned “rules of the road,” which tell you who has the right of way on the water and about interpreting some basic navigational markers.  After lunch we took our multiple-choice exam, and I got 100% and beat all the other guys in the class – yay!

We then went back out on the Hunter 30′ and practiced all the things we had learned on Day 1.  There was even less wind than the first day, and we could’t find any breeze at all.  So we “motor-sailed.”  We had lots of time to chat with Dee about her cruising experience and pick her brain for ideas and suggestions we could use.  We also practiced naming all the parts of the boat and how to use them.

Despite the rain we had one Day 1, and the forecast for rain on Day 2, it had been a pretty dry day.  Then, towards the end of the day we could see the weather moving in.  We watched it get closer and could see the wind and the rain moving across the surface of the water, approaching us from down river.  We all put our rain coats and hats on to get ready.  All of a sudden, the wind picked up and the squall hit us.  There was a lot more wind in that squall than rain.  A big gust came up and blew my bright pink hat off and up the river… a perfect opportunity to practice man-overboard!  Except we weren’t prepared for that strong of a wind and needed to bring in the jib right away in order to control the boat.  As a general rule, when the wind is light you want more sail and when the wind is strong, you want smaller, tighter sails.  So we did a pretty good job of quickly bringing in the jib and getting the mainsail trimmed as tight as we could.  By the time we were adjusted, my hat was long gone… good thing it wasn’t a real man overboard.

The squall only lasted a few minutes, but we got to sail in a bit of wind for the rest of the day.  By the end of the day, we had passed all of the practical components and we had officially passed ASA101!  We got log books, and Dee signed us off.