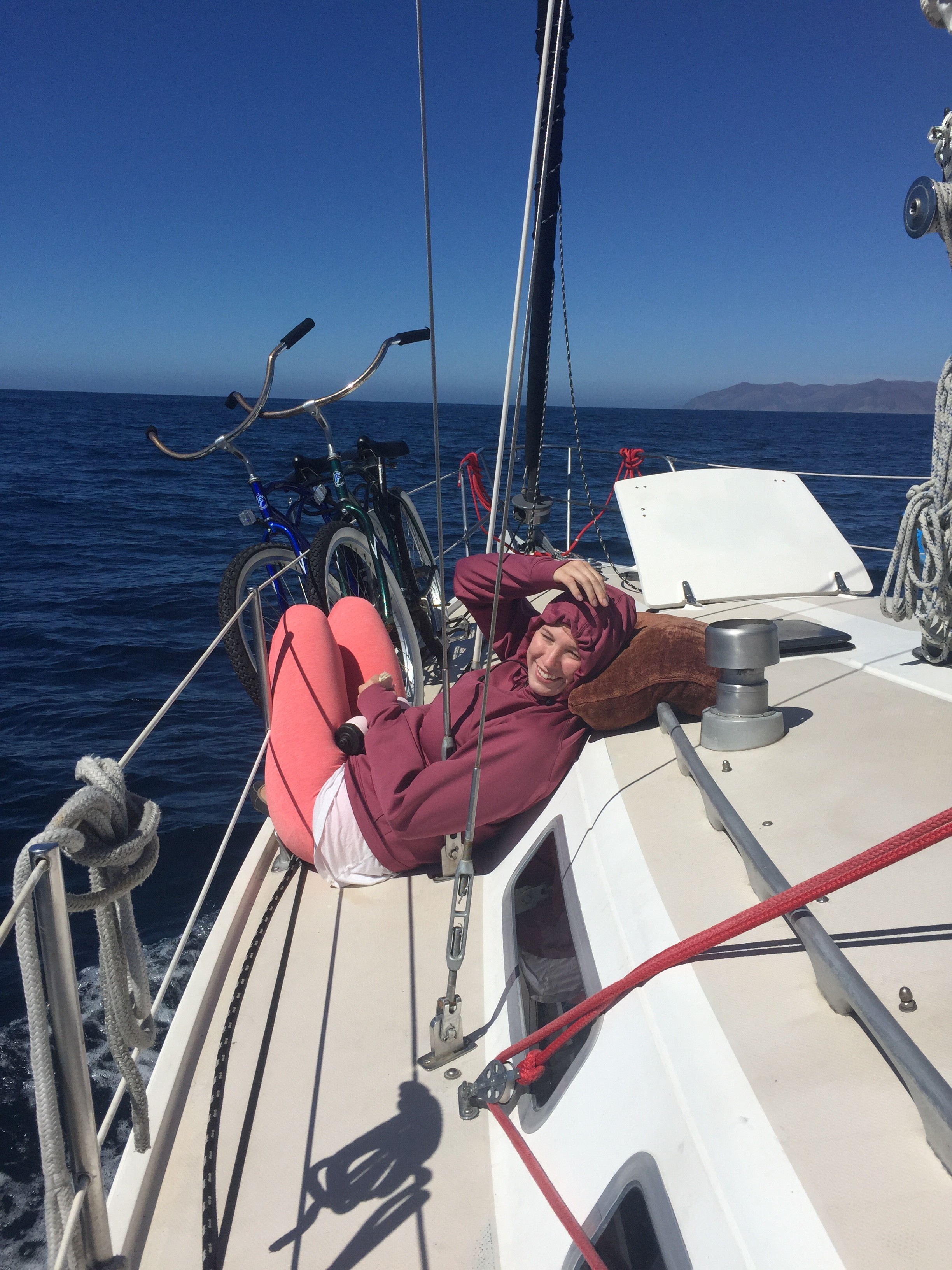 Well… what an eventful couple days it has been!  We arrived in Marina Del Rey, CA excited and ready for our first trip out in the ocean.  We met up with the delivery Captain and saw the boat for the first time.  John, the Captain, seemed like a great guy and the boat, a 36′ 1983 Catalina, looked great.  The boat had a couple of beach cruiser bikes on board, and we biked into Venice Beach for a couple of evenings out.  While we had a car, we also headed to the grocery store to get provisions.  We were planning the trip to take 4 days – 2 days from Marina Del Rey to Morrow Bay, and 2 days from Morrow Bay to Berkeley.

The plan was to motor most of the way up the coast towards San Francisco Bay, as we would be heading into the wind and against the current (we were really hoping to get a bit wind and be able to do a bit of sailing…).  As it is an older boat that’s been sitting for a while, we were told the main thing we would need to worry about along the way was the bio-contamination in the fuel tank clogging up the fuel filter.  But we had 5 spare filters on board and it was pretty easy to change the filter out.

Come Tuesday morning, we were all set and ready to go!  We were 4 crew on board – John (the Captain), his friend Greg (also acting chief engineer), and Ty and myself.  We pulled out of the slip at 8am at motored our way out of the marina.  As soon as we were pulling around the breakwater we started to feel the swells.  I happened to be below deck fixing up our life jackets and a few other things and started to feel a little queasy, so I came up to the cockpit for some air.  Leading up to the trip, Ty had been really worried that he was going to get seasick.  He had started taking the seasickness pills a few days before we left.  Turns out that was a great idea, because he felt fine!  I, on the other hand, didn’t think that I was going to have any trouble with seasickness, but I was sure wrong…  I spent most of the morning and early afternoon trying to nap up on the deck and avoid getting too nauseous and throwing up.

We did get to see a TON of dolphins though!!  At first there were just a few near us and they came and swam right alongside the boat with us, then later in the day we saw huge pods (there had to be over 30!), all swimming and jumping along!  Such an amazing sight!  While I was curled up on the deck I saw something strange coming up of the side of the boat.  At first I thought it was some big birds sitting on the water with their wings spread out dry.  I yelled at Ty to look and we realized that they were sea lions sleeping on there backs, sunning their bellies!  We circled around so we could get some pictures and video!  So cute!  Will post video later.

Unfortunately, I continued to feel pretty crappy.  We were on course and making expected time, but when we tried to get a weather update in the afternoon, we discovered that the VHF radio wasn’t working.  This was a pretty major system, because not only do you get weather updates, but it’s your main form of communication and calling for help in case of an emergency.  We had gotten cell coverage most of the way, as we were only about 10 miles offshore, but at this point we were out of range.

Then all of a sudden, around 4pm, right in the middle of starting to get dinner ready, the motor died.  Time to replace that fuel filter we had been warned about?  We were out in the ocean, taking pretty big rolling waves.  We needed to keep steerage on the boat and we had pretty decent wind, so we rolled out the jib and went under sail.  John went down and started looking at the fuel system.  He pretty quickly discovered that it wasn’t just the filter.  Ty pulled out the navigation system and found our closest port – Channel Islands Beach, on the mainland near Ventura, about 20 miles in the opposite direction.

We set our course and started sailing back towards shore.  It was amazing how much calmer it was going with the wind and the current, instead of bashing up against it.  We had some pretty decent wind and were actually sailing faster than we had been motoring.  We were doing about 7 knots and hoped to get to port before dark.  Along the way John and Greg worked on the fuel system and found that all the lines before the pump and filter were completely gummed up with this gross black goop.  They worked like crazy to get it back in working order, but no luck.

Oh, and I forget to mention… once we were underway from Marina Del Rey we had thrown a fishing line out to trawl behind us as we went.  Of course, in the middle of the broken engine, we got a fish on the line!  I took over the helm for Ty as he reeled it in. It turned out to be a baby bonito that was too small to bother with, so we threw it back.

Around 7:45pm it was dark and the navigation was showing that we were very close to the port.  There was supposed to be a seawall right before the entrance to the harbor, but it was dark and we couldn’t see anything.  Finally, once we were VERY close to the seawall, we finally saw the light.  And the giant waves that were breaking over the seawall right next to us.  Not a good spot to be in.  We were able to maneuver to the north side of it, but were a little leery about the channel entrance to the harbor.  The charts showed some really shallow spots, and we were losing wind and steerage.

We got vessel assist on the phone and let them know that we would need a tow into the harbor.  They told us it would be about 30 minutes until someone could get out there.  We tried to decide what would be the best place to wait until they got there.  We tried to just sail up the coast a bit to circle, but the current was pulling us towards the wall and we hardly any wind to power the boat or help is steer.  At this point, we figured we needed to chance the shallow channel and get behind the seawall, because otherwise we were just going to get pushed right up on the wall.  We started to circle around, and prepare for our approach into the channel.  Since we had almost no wind, we had very little steering.  Somehow, we managed to get in right behind the wall and out of the rolling waves.  We sailed a bit further and dropped the anchor.

A few minutes later, vessel assist came out of the harbor and pulled up next to us.  We tied up to him, pulled up the anchor, and he took us safely into the harbor.  I was so happy to be out of the waves and feeling a million times better.  Once the paperwork was complete and we were docked in a slip, around 10:30pm, we walked up the road to get some food… Food!  Yay!! It would be the first thing I would eat all day, other than a few bites of a tortilla and a couple pieces of pineapple that didn’t last long…  There was a Carl’s Junior open until 11:00pm.  I’ve never been so excited to eat fast food in my life.  The the fries and shake tasted pretty amazing.  We headed back to the boat and all crashed.