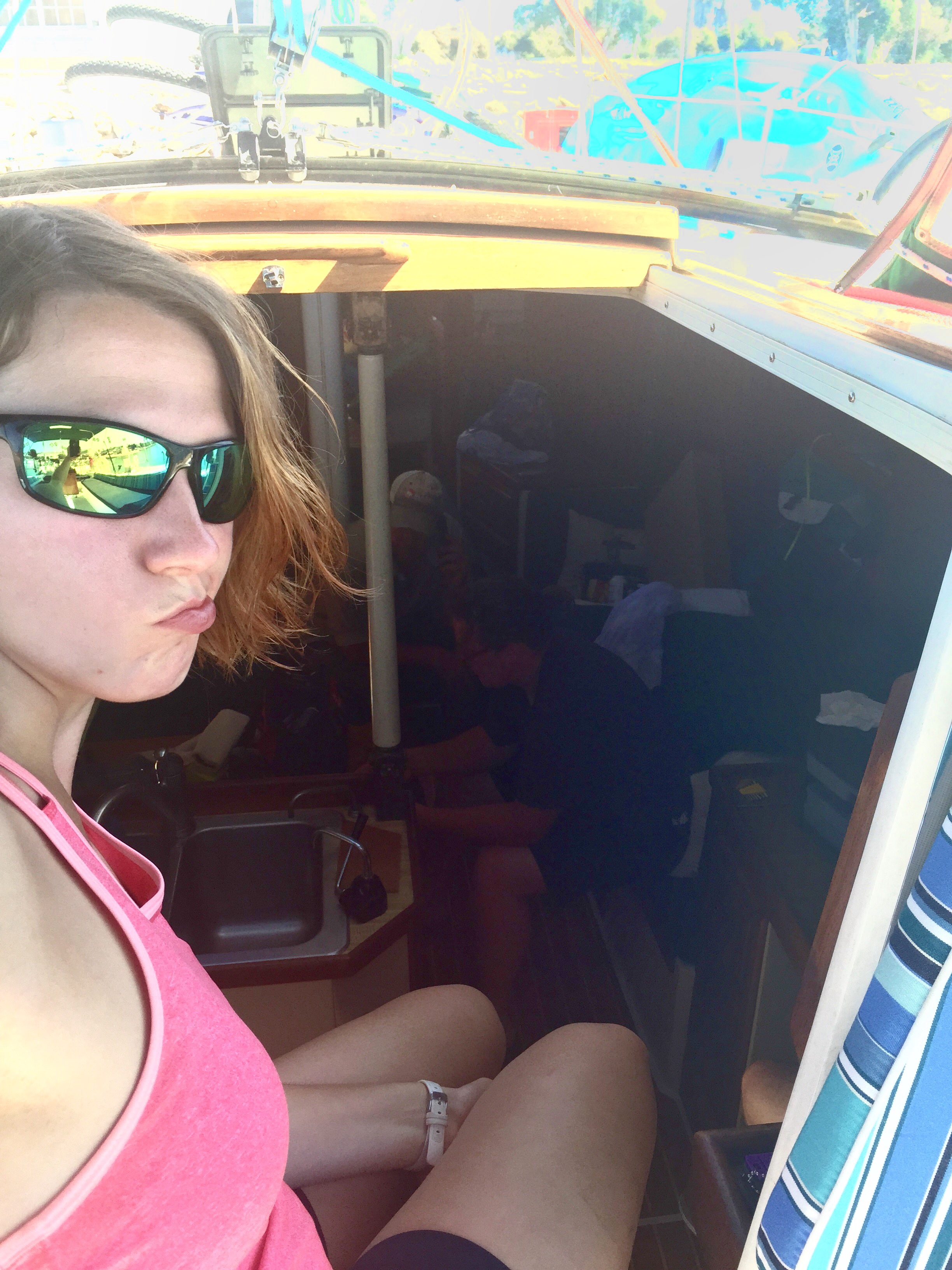 After arriving late Tuesday night into Channel Islands Harbor, under sail, with a broken engine, the following morning we faced a long day day of engine troubleshooting and repairs.  None of us knew much at all about a 1983 Universal Diesel engine, Model 25, but we were about to learn and figure it out!

Initially, we had hoped that it was just a fuel filter that needed to be changed, but the problem seemed to have snowballed.  While we were sailing towards the harbor the evening before, the guys had already cleaned out all of the fuel lines leading up to filter and put everything back together, but it still wasn’t working.  The pump didn’t seem to have any power to suck the fuel into the filter, so in the morning we headed up to the local hardware store and to West Marine in search of a new fuel pump and some parts.

After installing the new fuel pump, the engine still wouldn’t start.  After some contemplation, we decided that we should try to bleed the air from the pump and filter.  The fuel system didn’t have a priming bulb, so back to the store we went to get one to install so that we could start pumping the fuel through the system and pushing the air out.  After the priming bulb was installed, we pumped and pumped, but when we tried to fire it up, the engine still wouldn’t start.

There happened to be a guy parked next to us in the harbor who was living on his little sailboat and rebuilding the engine.  He seemed to be quite knowledgeable about diesel engines and we chatted with him a bit.  He said that we  would also need to bleed the air out of the low-pressure fuel pump that was located on the engine, as well as from each of the three fuel cylinders.  Basically, that meant we had to push and hold the start button, listen to the engine try to start pumping fuel, use a wrench to open a valve and let air and fuel sputter out, close the valve, and then kill the engine.  And then repeat, multiple times, until no more air came out.  And then once that valve had no more air coming out, repeat at the next valve.  So we sat there and cranked the engine for 20 seconds, then let it rest for 60, crank for 20, rest for 60… and then repeat again, and again.  We tried to catch and soak up most of the fuel, but the air was filled with diesel fumes.  Lucky the motor is right under the companionway leading up to the fresh air in the cockpit.

After hours of trying to bleed the engine and spending time reading forums and watching YoutTube videos on the process for bleeding the engine, we still had no luck.  Eventually, we decided to call it a night and let the starter rest and cook some dinner.  We grilled up some carne asada to go in tacos with the tomatillo salsa that Ty had been making the day before when we were out in the ocean and the engine died.  The salsa and tacos were absolutely delicious!  And I was happy that I got to enjoy them in the harbor, because there was no way that I would have been able to eat any of it while we were at sea!  Any sort of food smell had been making me so sick the day before.

(If there was one positive to the engine breaking down, it was that it gave me a couple days to take the seasickness medicine and hopefully not be uselessly sick for the rest of the trip!)

The next morning, we woke up to a beautiful sunrise.

We got right to work and tried to crank and start the engine.  Nothing.  We decided to try a last ditch effort…  the guy next door had told us that if all else fails, try spraying some starting fluid into the the air intake.  So we took off air filter and cover, sprayed a good amount of aerosol starter fluid in it, and just like magic, the engine started!  We decided to let it run for a bit to make sure it continued to work.  It did.  Then, we turned it off and tried to start again.  Nothing.  But when we sprayed the starter fluid in, it started right up again!  Looks like it just needed a little boost and it would hopefully be ok…

The other really fortunate thing about needing to stop into the harbor, was that we could get a working VHF radio.  We discovered that the antenna for the existing radio had actually been snapped off long ago and corroded.  No wonder why it wasn’t working….  To West Marine we went and found a new antenna, and also picked up a handheld to have as a back up.

We headed back to the boat to install the antenna and try to work on few other pending projects on the boat.  Well, after installing the new antenna, the radio still didn’t work.  We hoped on the bikes and went back to West Marine again… They were getting to know us quite well by this time.  We brought in the actual radio and they tested the radio and said it didn’t work at all.  So we got to purchase a brand new radio to go along with everything else.  Once we got it back and installed it, we flipped the switch on, and it worked perfectly.  We now had 2 working radios on board!  Yay!

Channel Islands Harbor is a pretty small place, just south of Ventura.  There wasn’t much around near the marina, but there was a cool little 24 hour cafe that had some amazing doughnuts!  They were all super fresh, and they had a ton of variety, and some giant ones!  I had to get one before we left, and went for a simple chocolate sprinkle – it was perfect.

Eventually, around mid-day on Thursday, we started up the engine with the can of starter fluid, and we were on our way, headed North!

As always, thanks for reading!  I’ll put up some video once we’re back home.  Check back later this week for the next update – Channel Islands Harbor to Santa Barbara, shifting plans and waiting for the right weather window….

Related Articles
Breakdowns, Failed Repairs and Struggles in Zihuatanejo… Because when it rains, it pours!
Surviving the Summer Heat: Sea of Cortez Update
Out of the Harbor and Back on the Ocean, but now with Boat Troubles… (Part 2)