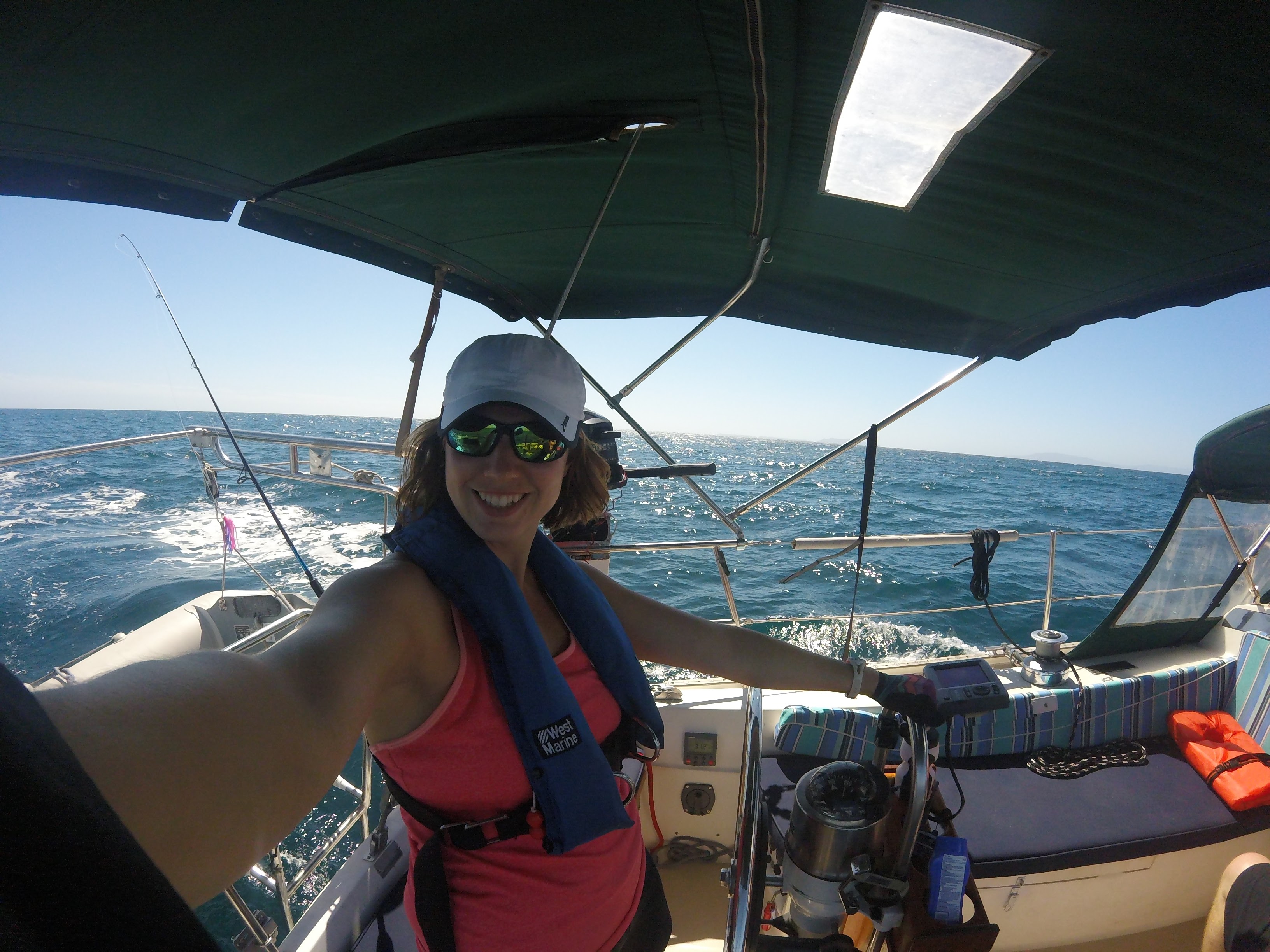 Around the middle of the day Thursday, the important parts of the boat were fixed up and she was ready to continue on our journey!  On our way out of the harbor, we swung by the fuel dock, filled up, and then we were on our way North again.  We pulled out from behind the seawall that we had sailed behind two nights earlier and out into the ocean.  Immediately you could feel the ocean swells, just like when we left Marina Del Rey, but luckily two days of taking seasickness medicine seemed to have helped me tremendously, and I felt alright!  I was so relieved and happy to be able to enjoy myself and actually take in the experience.

It was roughly a 5-hour trip up to Santa Barbara, from there we planned to pull in, stay the night and check the morning weather forecast for Point Conception.  Point Conception is the point where the mostly North-South portion of the Central California coast turns inland, and a little online research revealed that it is known as “the Cape Horn of the Pacific,” where varying winds and currents meet to create challenging conditions. It was currently forecasted to be pretty high winds and high swells.

But first, we had to get to Santa Barbara.  It was a beautiful day, and I was so happy to be feeling better at sea!  I sat down at the helm with Ty and had him show me how to use the autopilot, GPS and chart plotter that I had been too sick to look at on the first day when we were out.  We set some way points along the coast to Santa Barbara, set the auto pilot, and let it take us on our way!

While we were hanging out, enjoying the sun and the view, we noticed that the wind was coming just off of our port side bow, and we convinced the captain to let us roll out the sails!  We started with the jib, and once it was out and set, we picked up about 1 knot of speed.  We decided to try throwing up the mainsail too, and reduced the RPMs on the engine and were happily motor-sailing along at the same speed!  If only we could have shut off the engine completely, but that didn’t seem to be the captain’s style…

We threw our fishing lure out, along with an additional handline that we had purchased while were stuck in Channel Islands Harbor.  Ty rigged up a fish alarm with two beer cans, and we got back to relaxing.  Not much later, the cans slipped down and started to swing, we had a fish on the line!  We reeled it in and it was a decent-sized Yellow Tail.  Not 15 minutes after we had thrown the line back in, we snagged another one!  It was smaller, but the hook had ripped right through his gills, and he wasn’t going to live so we kept him too.  We were excited for fish tacos this evening!

Throughout the day, the wind and waves had been building, and all of a sudden we noticed that the waves had gotten quite big and we were bashing into them pretty hard.  The captain decided we needed to take the sails down.  So we reluctantly pulled in the sails.  We continued to bash our way up the coast, straight into the waves.  All of a sudden, Ty noticed that the metal railing that made up part of the stern pulpit had broken clean off from the stanchion rail!  The boat had a dinghy hanging from davits off the back, and apparently the force of it swinging as we bashed into the waves had put enough force and stress to actually break a major part of the boat.  We altered our course slightly so we weren’t bashing straight into the big waves, and used some rope to tie up the rails, and hoped they held together until we got to Santa Barbara.  It was rough and chopping the rest of the way, until we were almost pulling into the harbor.

We pulled into the marina just as the sunset was starting to glow.  Once we got settled, we put the fish on the grill and made some salsa.  Since we had so much fish, we cooked one up for tacos, and one to eat just plain.  They were both incredibly delicious!  We were tired from a long day and passed out under the stars in the cockpit.

As always, thanks for reading!  I ‘ll have some more updates out very soon! 🙂