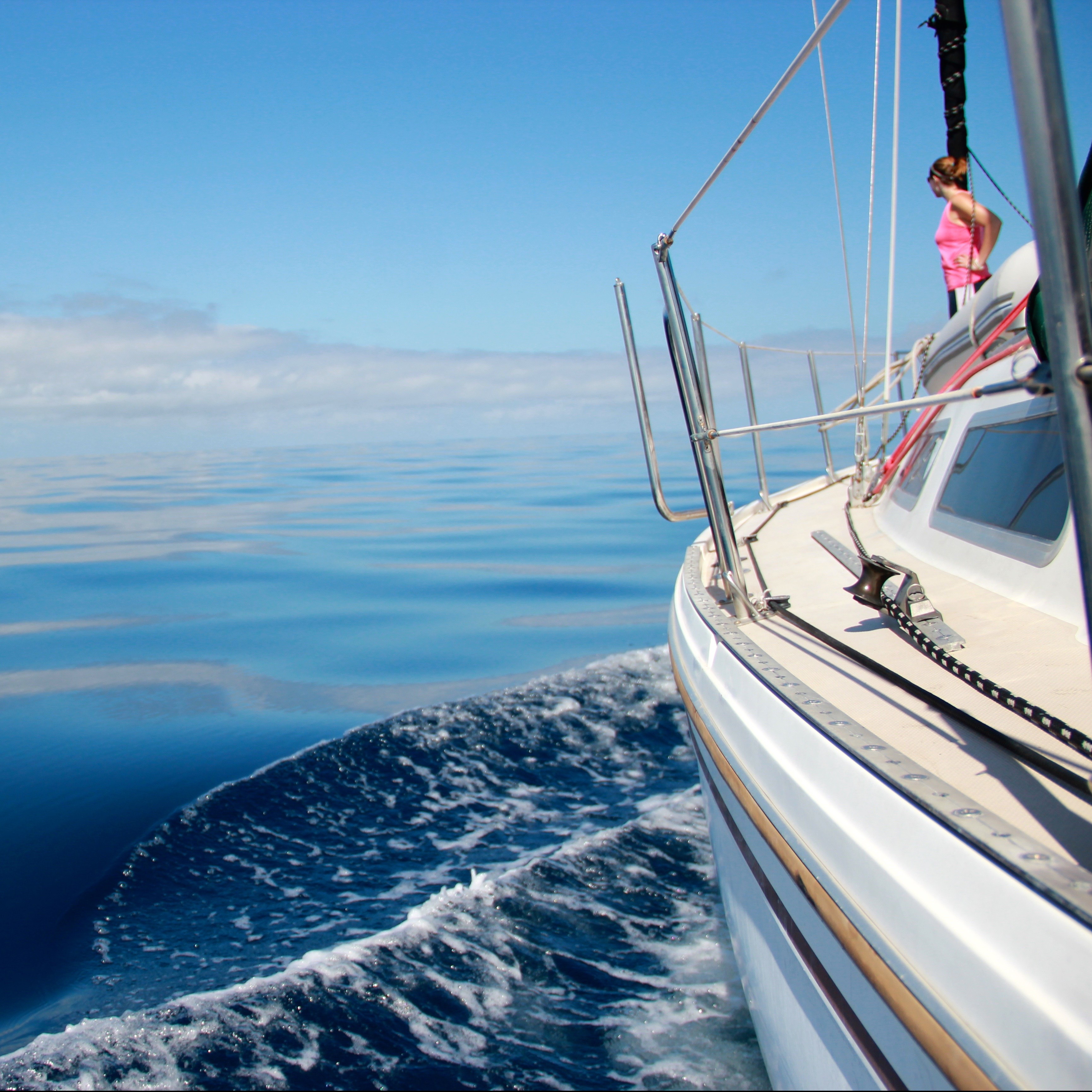 Come Monday afternoon, it was finally time to leave Santa Barbara!  Yay!  Not that Santa Barbara was a bad place, but we were eager to get on our way and back on the ocean.  We checked out of the marina at noon and headed around the pier over to the anchorage.  The plan was to drop anchor and wait until about 4pm to leave.  We were approximately 8 hours from Point Conception, and wanted to round it at the best time, which is the middle of the night.  After that, we would push through, make a fuel stop in Monterey, and then head all the way up San Francisco Bay in one shot.  So we dropped anchor, played some Uno and rested up for the night ahead.

Finally, 4 o’clock rolled around and we pulled up the anchor!  We motored though the channel, out of the harbor and into the ocean, dodging a few crab pots along the way.

Once we got out in the ocean, it was still pretty rough and we were bashing into the waves and bouncing around pretty good.  Hoping it would settle down, we made some dinner and watched the sunset.  As we sailed up towards the point, there were there were several brightly lit up oil platforms, you can see the glow on the water from these for miles away.  All of the platforms in this area have a name starting with “H,” we passed Holly, Hondo, Harmony and Heritage.

As we were approaching Point Conception, we laid down to try to get some rest so that we could take over watch later in the night.  It was still a little choppy, but it seemed like it was starting to calm down a bit.  Ty was still awake as we rounded Point Conception at about 11pm, and captured the moment on our Navionics app.

Just before sunrise, I woke up to take over for Ty, who had been on watch for the past few hours.  As Ty laid down to rest, I took over the helm and waited for sunrise.  By morning, the ocean had become glassy and calm, and it was so peaceful sitting in the cockpit watching the sun begin to come up.  The only thing that would have made it better was if we had the sails up and no noise from the motor, but at that time of day, there was virtually no wind.  It was amazing how different the water was, compared to the waves and chop that we had experienced our first afternoon when we left Marina Del Rey and the afternoon we that we arrived in Santa Barbara.

A few hours later, everyone was up and we made breakfast.  I was still at the helm, and noticed that the autopilot was starting to act strange.  Since we had set out from Marina Del Rey, it had occasionally been kicking off, and you would have to steer and reset it.  But this time, it was doing something different… We would be going along, on course, and then all of a sudden it would begin to turn the wheel back and forth, drastically oversteering, and then veer off to port (left) more than 90 degrees.  Ty and I both played with it, and couldn’t seem to figure out what was happening.

We couldn’t find a manual for the autopilot, but eventually found an option to calibrate the compass.  In order to do this, we had to slowly steer the boat in a circle.  We tried this several times, and hoped it would fix the problem.  We watched it for a few hours, and the compass readings seemed to hold and match, but we kept having the same problem with the auto pilot suddenly veering off course.  So we spent most of the day either steering by hand, or taking big left turns every once in a while.  We thought it was so strange that we were having this problem in such calm seas, when the autopilot had worked so well in the rougher conditions.  Not having a manual was frustrating, but eventually, later in the afternoon, we found a setting for rudder gain – there was option 1 or 2.  We tried changing it from 2 to 1.  Miraculously, this seemed to work!  It turns out that rudder gain controls how aggressively the autopilot responds to correct course errors.  Luckily, it had been on the more aggressive setting when we were in the rough seas, but now that we were in calm seas, it was making huge adjustments when only needed small adjustments were needed.

The seas remained incredibly calm and glassy throughout the afternoon.  Unfortunately, we didn’t see anymore dolphins or sea lions.  However, we did have something bite at out fishing line…. something big and strong.  Whatever it was, it broke our 40lb fishing line and got away with our lure!

As the sun set, we cooked dinner and settled in for the evening.  Ty and I were planning on taking the middle of the night shift, so we went below after dinner and tried to get some sleep.

A few hours later, around 10:30, the other crew woke us up… we were starting to have engine trouble again.  Ty and I got up, and got ready to get the sails out.  There was a light breeze from the northwest, and in order to keep our speed and steering power, we either had to sail at an angle in towards land, or out to sea.  We were several miles offshore, but decided that in the dark, it would be much safer to sail out to sea.  So we turned the boat and rolled out the jib.

With the engine off and the sail out,  it was incredibly peaceful and quite.  We were actually making pretty good time once we had the sail set, considering there wasn’t too much wind, about 4.5 knots on average!  The other two guys went below and Ty and I settled in to the cockpit, imagining how nice it would have been to have sailed the whole trip like this instead of having the constant rumble of the engine.

We suspected the engine trouble was a fuel filter issue again.  Luckily, after two days of working on the boat in Channel Islands Harbor, the guys now knew how to change and bleed the engine.  When they took the fuel filter apart, along with the black bio-sediment, there was a white milky substance… it almost looked like seawater.  They swapped out the filter (luckily we had several extras on board), and then proceeded to bleed the engine.  About an hour later, the engine was back up and running.

While it was great to have a working engine again, we were sad to loose the peace and quiet and go back to motoring.  I rested for a few hours longer, and Ty took over watch at the helm.  Around 2am, I woke up and took over watch for him.  Since my other “night” watch had started just before sunrise, this was my first real night watch.  I bundled up in my coat and blanket, and settled in to my seat at the helm.  It was so different going through the night in complete darkness, being surrounded by nothing but the sea.  When your eyes are adjusted, you can see a bit of the water stretch out next to the boat, and then it just turns to blackness.  There was almost no light from the moon, as we were approaching a new moon, but you could see a few lights here and there way off in the distance along the shore.  There was actually something incredibly peaceful about being there alone, watching the water rush by and moving through the night.

A few hours before sunrise, we were coming up to Monterey Bay.  We had planned to pull in here, fuel up, and then continue to make our way up the coast, but we would be arriving a couple of hours before the fuel dock opened.  We decided that once we got into the harbor, we would either drop anchor or tie up and rest for a couple of hours while we waited to refuel.

As we passed Carmel, we spotted the first channel marker and began our approach into the harbor.  As we were pulling in, we could hear the sea lions barking from all around.  We got into the marina, pulled up at the end of one of the docks and tied up.  Since we finally had phone signal and internet access again for the first time since leaving Santa Barbara, we looked up the tide charts for San Francisco Bay.  Ideally, it is best to go under the bridge and enter the bay at slack tide, which is the period of time with the slowest current.  Since we would be going straight through from Monterey to the bay, we needed to make sure we timed our approach correctly.  If we left right after fueling up around 8:30am, we calculated that we should reach the entrance to the bay in approximately 14 hours, about an hour after slack tide at 9:40pm.  The next slack tide was at 5:30am.  The captain decided that he would rather wait in Monterey until 2:30pm, and aim to pass under the bridge in the morning.  I was exhausted from being up most of the night and laid down and got some much-needed sleep.

As always, thanks for reading!  Up next time… Sailing under the Golden Gate Bridge and finally making it to San Francisco Bay!