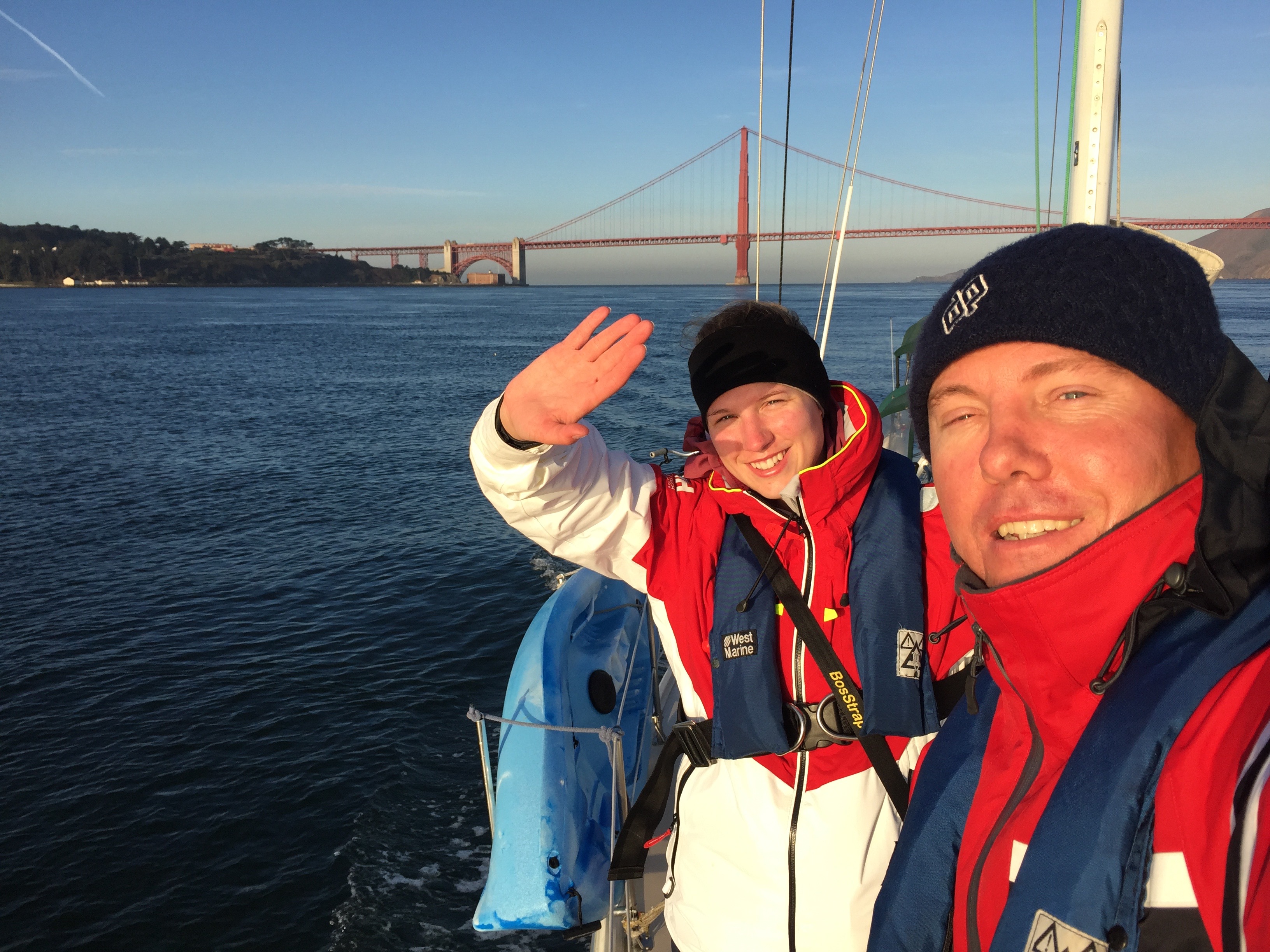 After arriving in Monterey Bay in the early hours of the morning for a quick fuel stop, we decided to delay our departure up to San Francisco Bay so that we could cross the bar at slack tide.  Based on our average speed and distance we had to travel, we planned to leave about 2pm and enter the bay about 5:30am.  While I thought it was a better idea to get on our way and adjust our speed enroute – incase we ad more engine trouble, bad weather, or maybe we could even sail some of the way! – I was happy to have some time to sleep and then go shower at the marina.

After my nap and shower, we went in search of some food.  We found a really cool little spot near the marina called The Wharf Marketplace.  It was a deli/coffee shop/wine bar/market that had great, fresh, healthy, tasty food that was all sourced locally.  They also had a nice area to sit and Ty got the chance to catch up on some work.

A little later than planned, around 3pm we headed over to the fuel dock to fuel up.  Along the way we passed the breakwater that was home to TONS of sea lions basking in the sun and barking.  We had heard their barks when we pulled into the Marina in the early morning, and now we could see why… There were so many of them, all lounging around, napping, sun baking and hanging out with the birds.  They were pretty cute.

Finally, around 3:30pm we were pulling out of the harbor.  Before we even got out of Monterey Bay, we noticed the water was pretty rough and choppy, by the time we were completely out of the bay and into the ocean we were hitting some pretty big waves.  It had been so calm when we arrived in the morning, and now the weather forecast was saying 4′-6′ swells every 6 seconds, however we were hitting some waves that were breaking and were definitely bigger than 6 feet.  The boat was slamming directly into the waves and we were getting tossed around like crazy.  We decided to alter our course and head a bit more to the west instead of directly up the coast so that we hit the waves at an angle instead of head-on.  This helped to make it a slightly more comfortable ride, but we were still making terrible speed.  We had estimated an average speed of 5 knots/hour, but in these conditions we were only making about 2.5 knots/hour, which put us way behind schedule for arriving San Francisco at slack tide.

Despite having felt great at sea after beginning to take the seasickness medicine, in these rough seas, I began to feel a bit seasick.  With the rough conditions, we decided to do longer watches, but have two people on shift to trade off with each other more often.  Ty and I took the first watch from 7pm-11pm, the others would take 11pm-4am, then we would take over until around 6am, when we hoped to be coming into San Francisco Bay.  For the first part of our shift, I laid down to try to take a quick nap and feel better.

Once I was up and behind the helm, I began to feel a bit better and Ty laid down to take a nap.  It was dark and choppy and we were still bouncing up and down.   I was watching for lights from a few different lighthouses to compare with the chart and keep track of where we were.  Every 10-15 minutes I would stand up and take a good look around to make sure everything was still matching up and that there were not any lights off in the water from another boat.

I kept seeing a white light straight ahead that appeared to be flashing.  The pattern seemed to kind of match up with a weather buoy that was about 10 miles straight ahead on the chart, but it didn’t look like it was 10 miles away and I couldn’t tell if it was actually flashing, or if if was a light from a boat that was disappearing into the waves and then reappearing with the big swells.  I kept watching it, and eventually it definitely seemed to be getting closer.  I woke Ty up to double check and make sure I wasn’t crazy, and he thought it looked pretty close too.  So we altered our course by about 10 degrees and kept watching.  The light started to get very bright and very close, it was definitely another boat.  We ended up passing by each other at a pretty close distance, but it was so dark we couldn’t see anything but the extremely bight light.  After it passed, we were back to total darkness.

Finally, it was the end of our first watch and we laid down to get some rest.  I didn’t wake up until just before sunrise, Ty was already on watch and the water had calmed down considerably.  The sun was just beginning to come up and it looked like it was going to be a beautiful sunrise, just a few wispy clouds and a little mist in the bay.  We we were getting very close to the entrance of San Francisco Bay and I could just barely begin to see the bridge off in the distance.  I sat up on the bow and took pictures as the sun came up and we got closer. 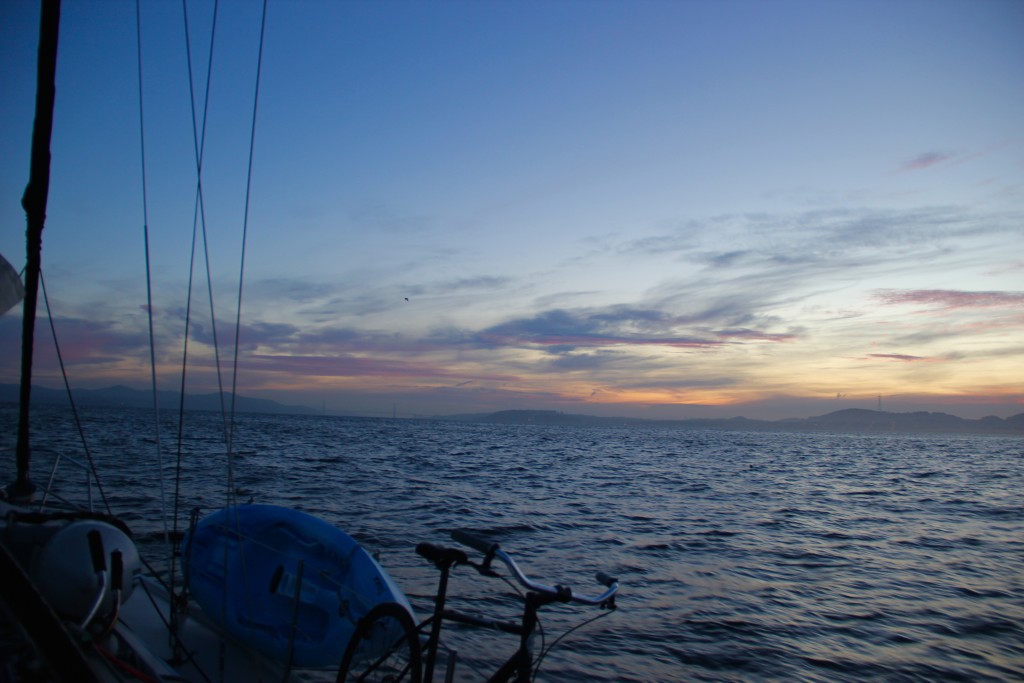 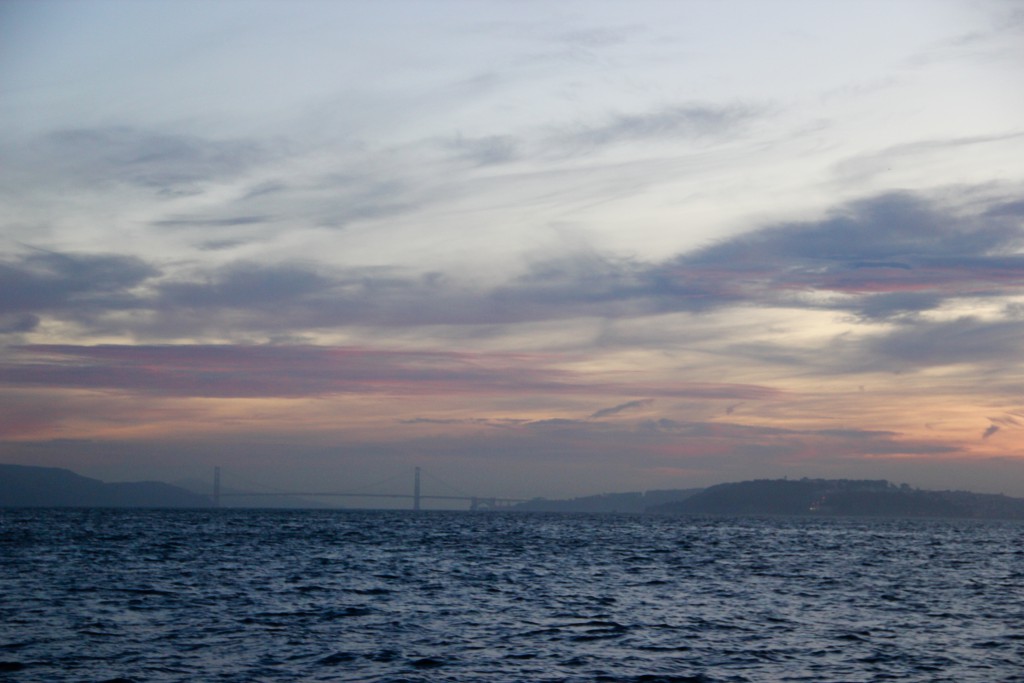 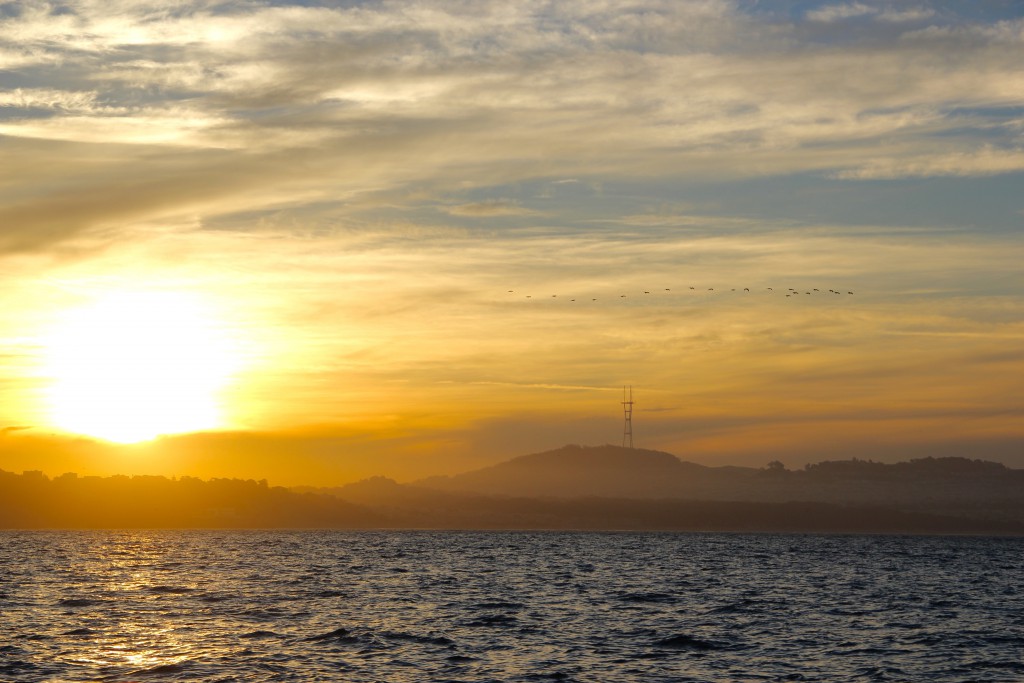 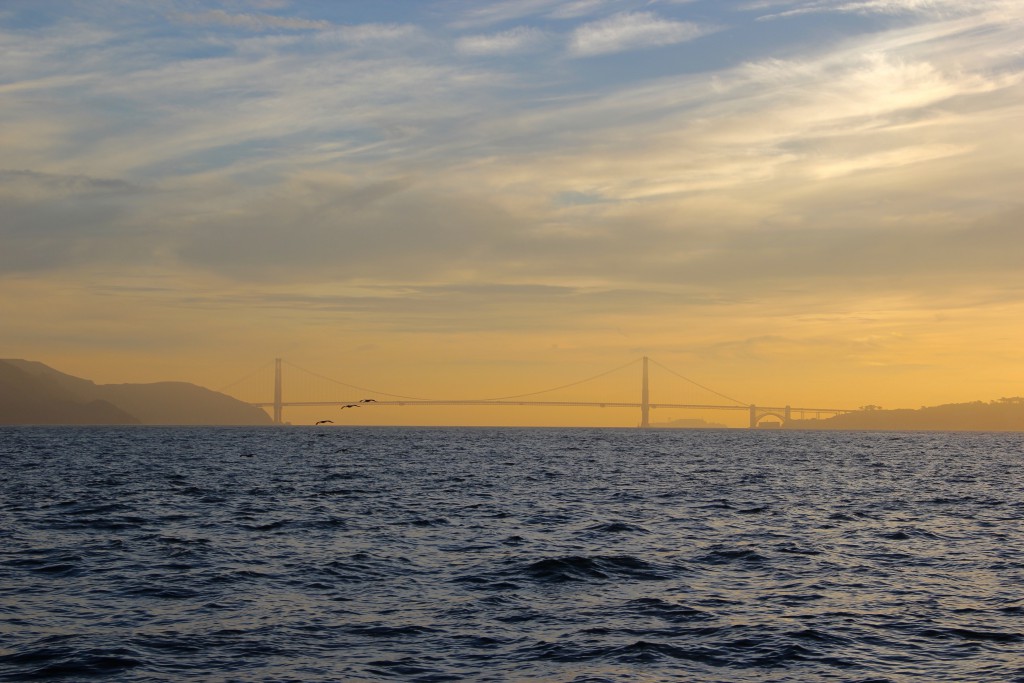 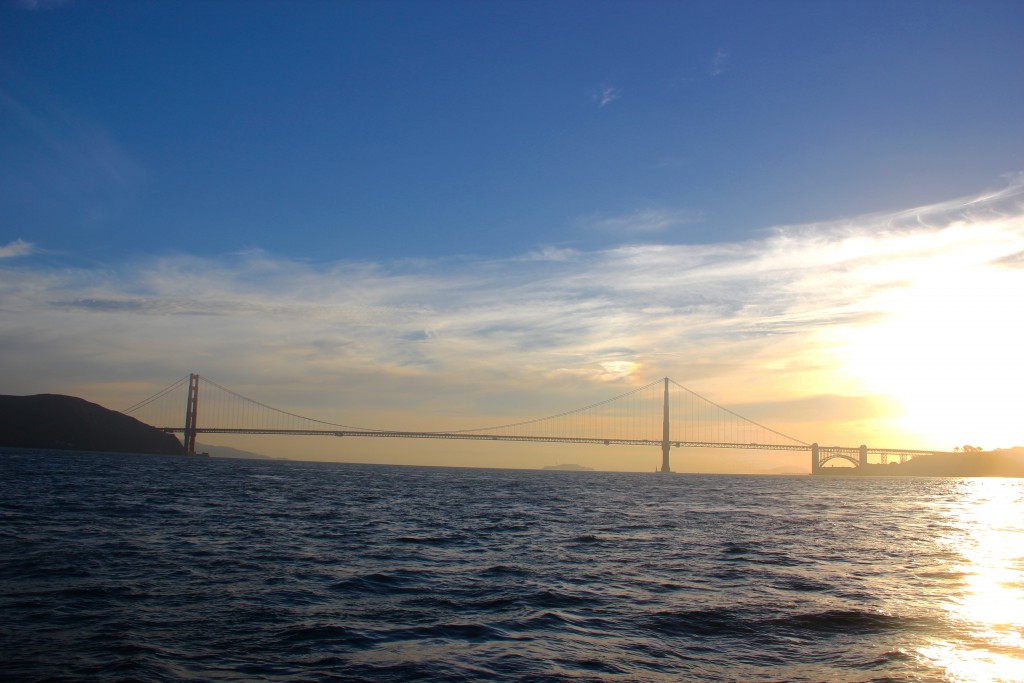 The others woke up just as we were approaching the bridge.  We followed the channel, and began to head into the bay.  We crossed under the bridge at about 8am, 2.5 hours later than we had planned, and right at the maximum current during the tidal change.  It didn’t seem to matter though, as we passed smoothly underneath with hardly any other boats out.  It was a clear day in the bay, with just a bit of mist hanging in the air.  We passed by Alcatraz and got an amazing view of the city from the water! 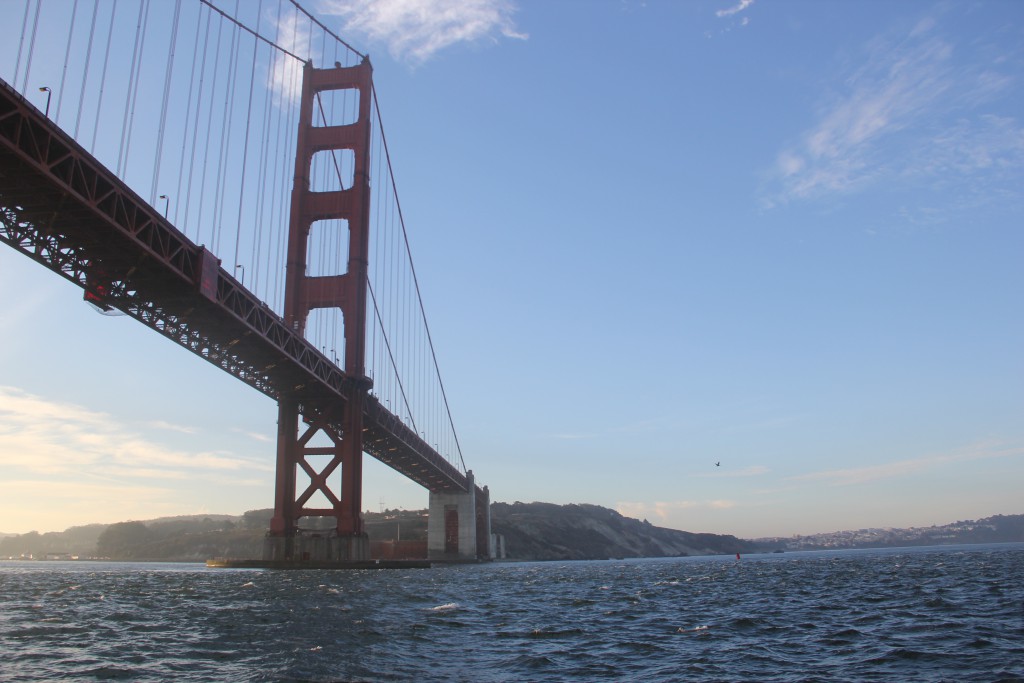 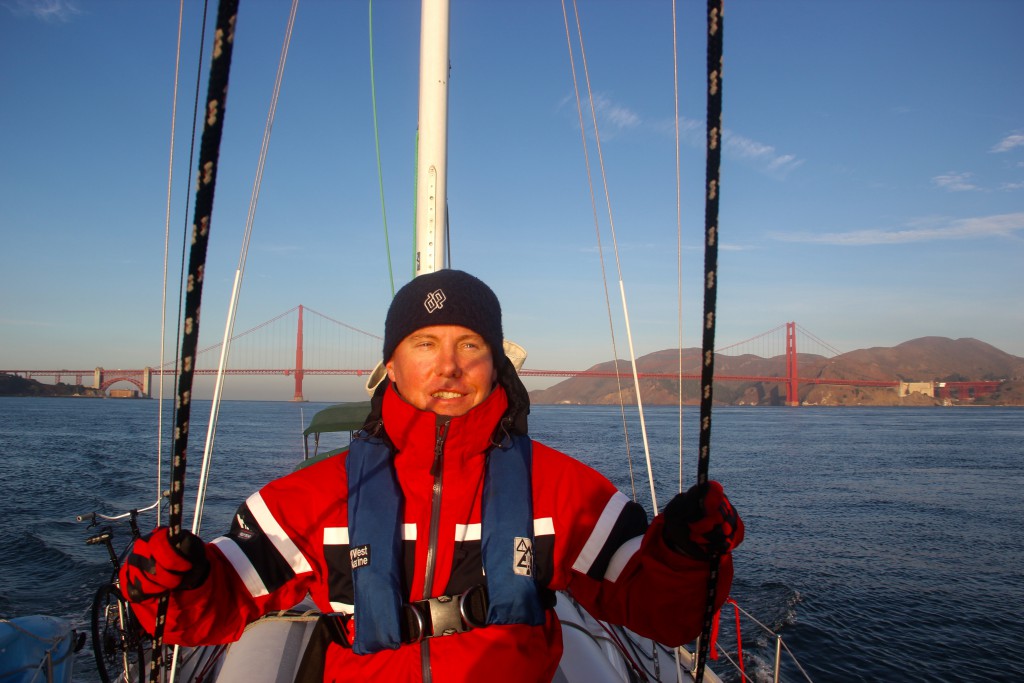 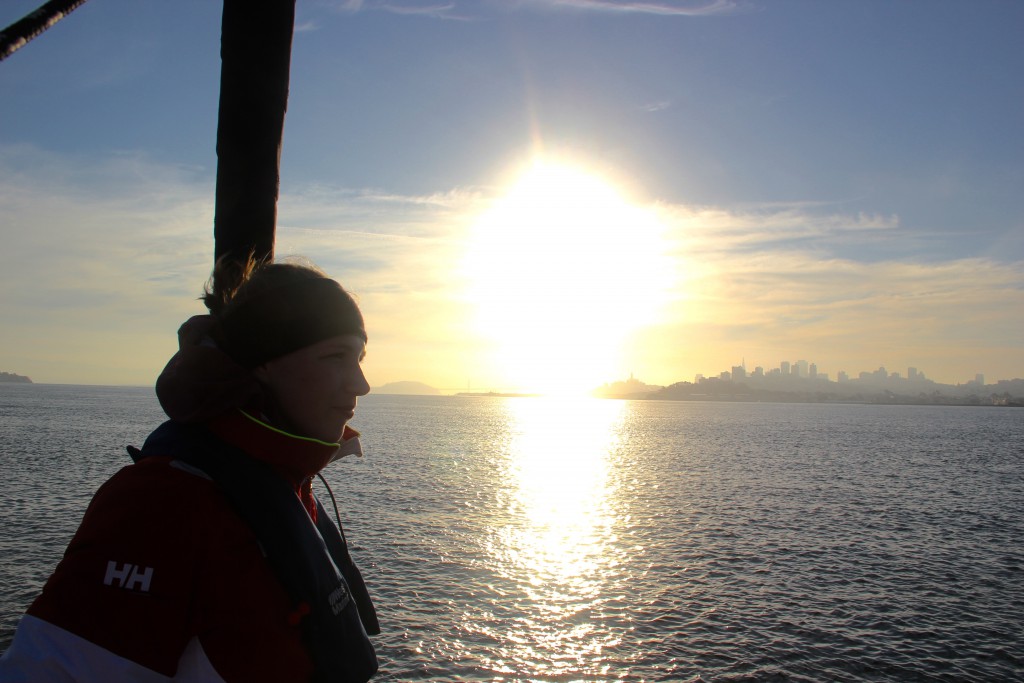 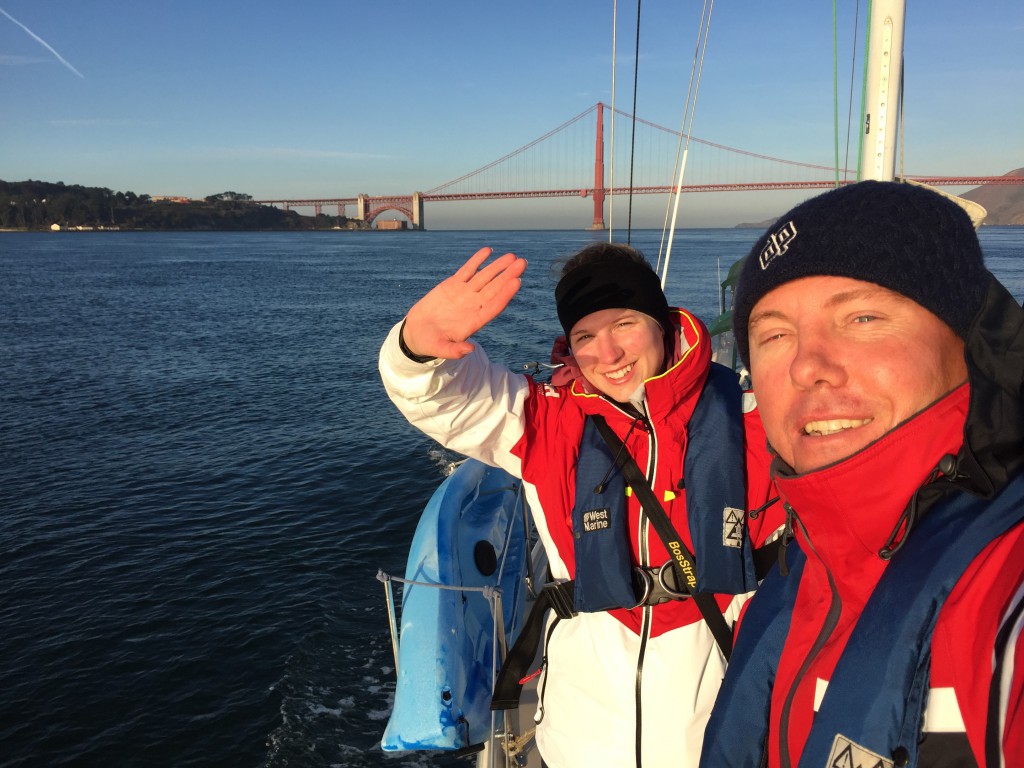 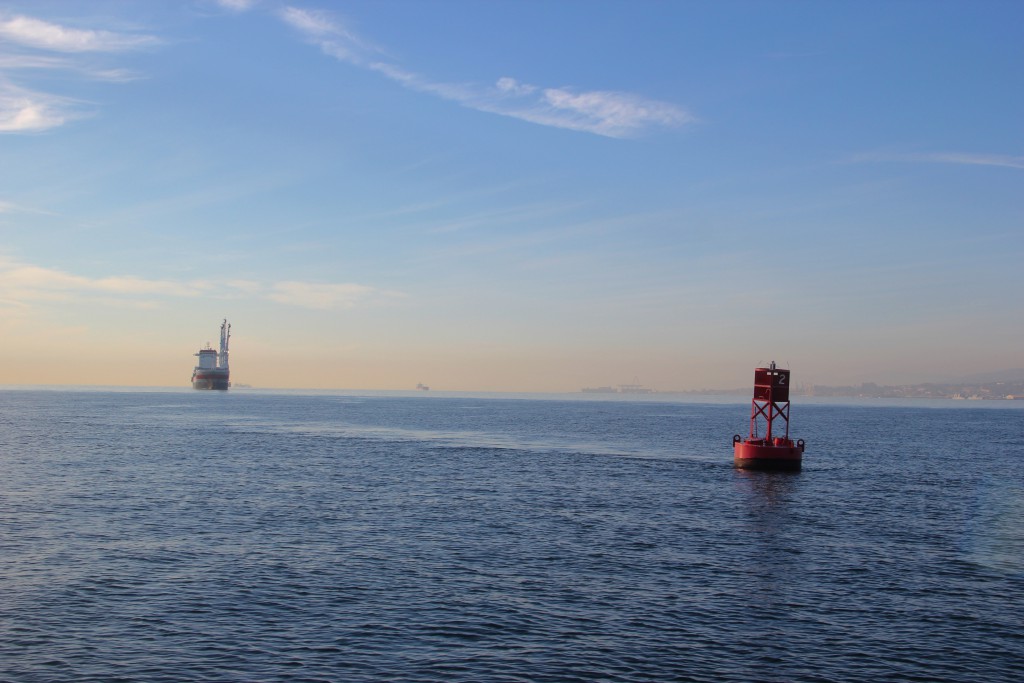 As it ended up, we weren’t headed to Berkely.  Instead, we were headed to a marina at Alameda Island, right next to Oakland.  We passed under the the Bay Bridge and up the shipping channel near the Port of Oakland.  We passed some massive cargo ships along the way into the marina.  You always know that those cargo ships are big, but until you’ve seen one from the water level, it’s hard to grasp just how big they are.  They are huge, massive beasts carrying an incredible amount of containers.  Quite amazing! 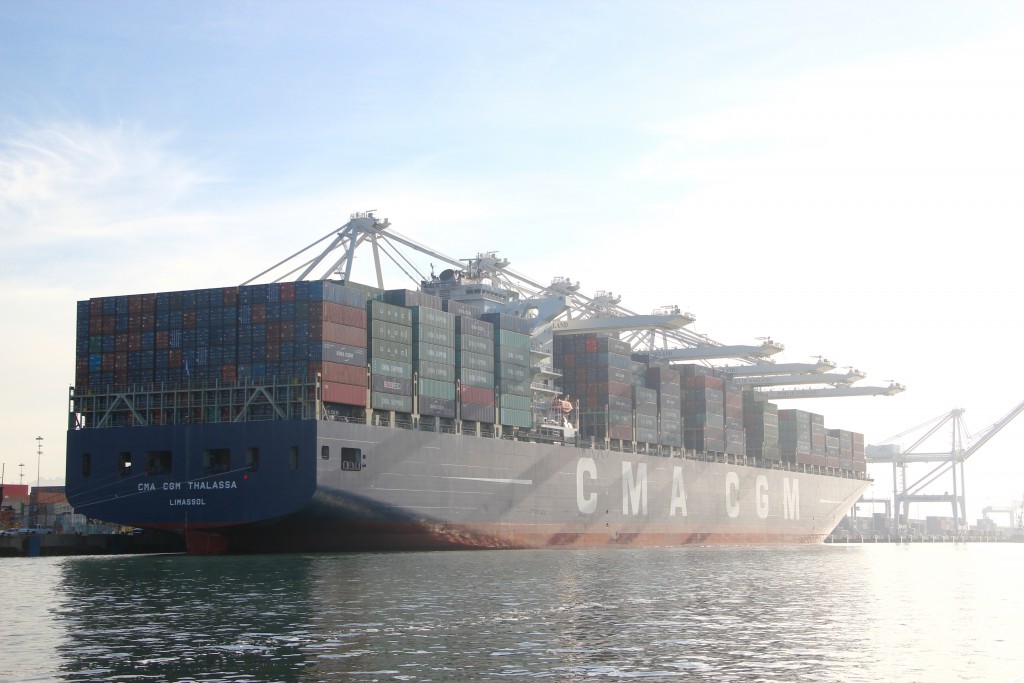 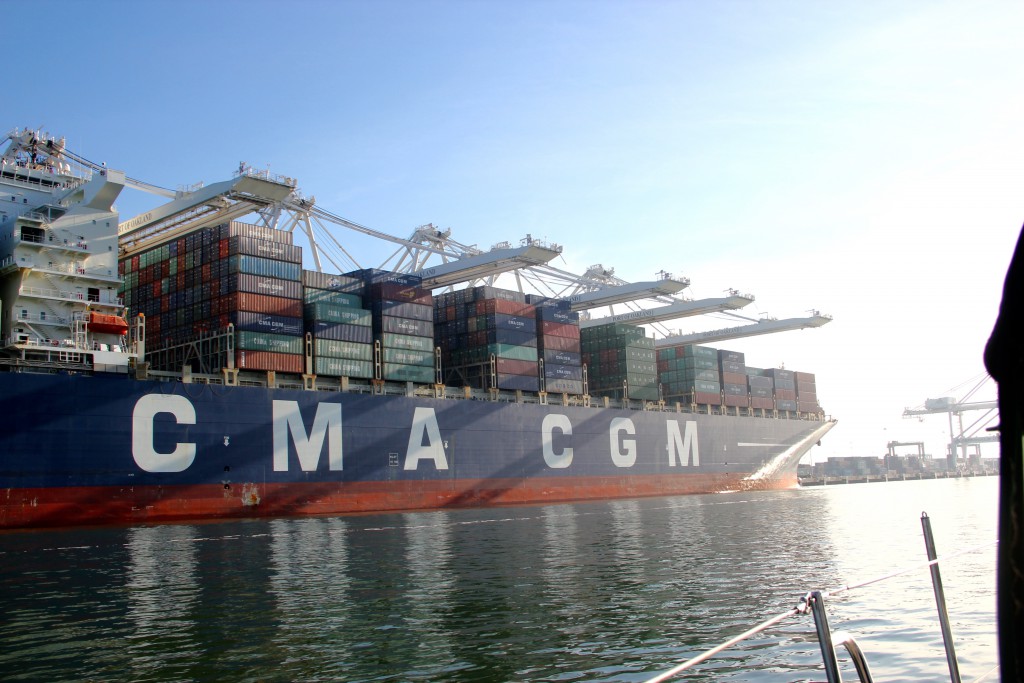 Finally, we found our marina and navigated to the reserved slip.  Almost a week after we had planned, we had finally arrived!  Although things had not at all gone to plan, we still had built the experience and gotten a taste of life at sea.  We headed home eager to get our own boat and start making our own adventures!

A big thanks to all of you who have read our updates!  I’m currently working on putting together a few videos of the trip so you can see what we were up to and get an even better look at life on the boat!  Stay tuned!