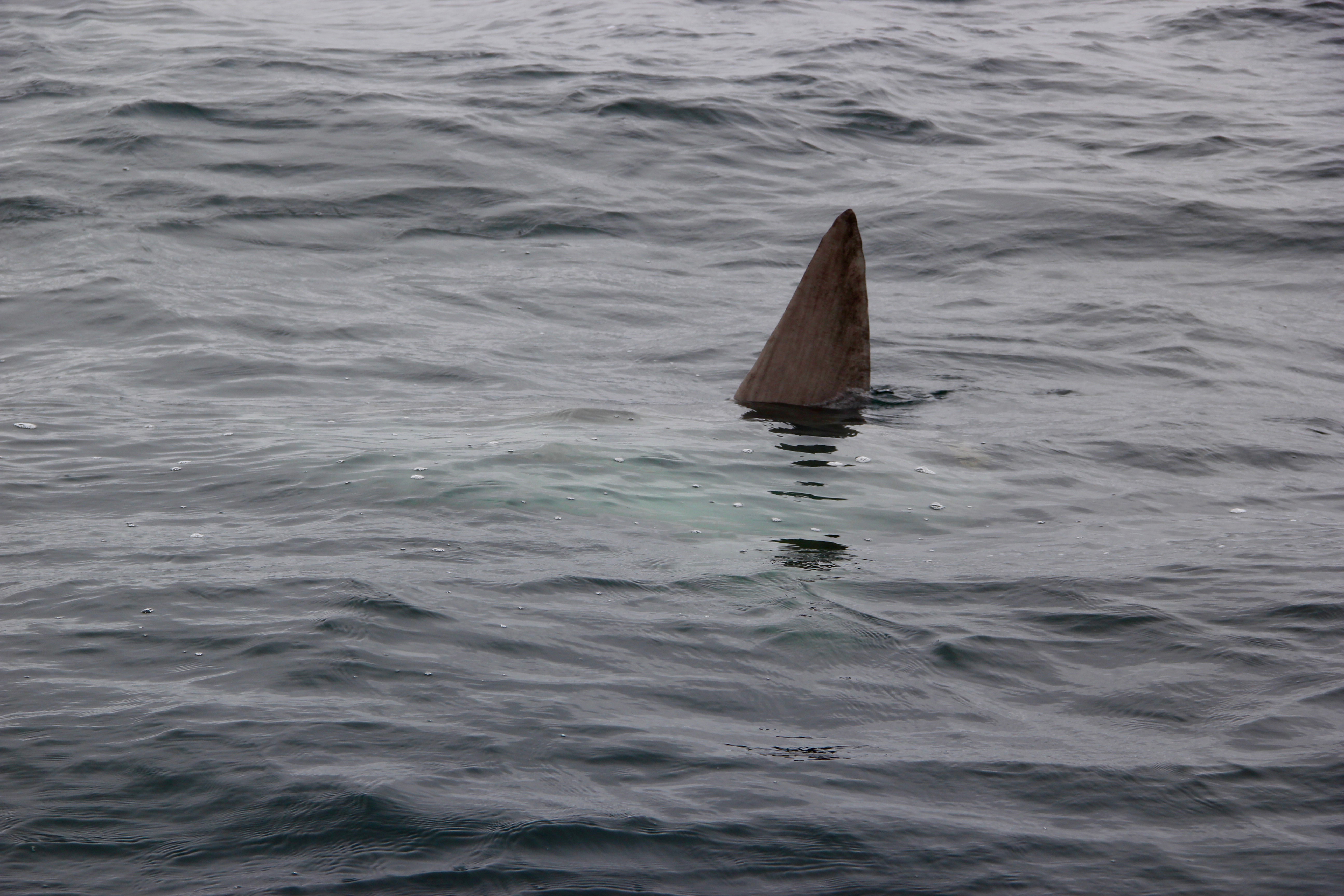 We had no idea what to expect to see this far from land… would there be signs of life, or lots of nothing?  Some days we would see a couple of cargo ships, and then we would go another couple of days before seeing another sign of “the real world,” or human life.

We were very surprised at what we did see in terms of animal life!

Our second day at sea David, our crew, hooked a big ol’ Albacore Tuna.  As he was reeling it in close to the boat you could see it in the water… flashes of very bright, light, shimmery blue, with long, narrow fins on the sides that looked like wings, trying its best to dive back down and escape the hook.  I had the honor of gaffing it and hauling it up on board, it was incredible how big and strong the fish was, what a cool creature!  I really did feel bad hooking him, but we enjoyed the meals he gave us.

That guy happened to be our only catch of the trip, but he fed us for about a week, so not too bad I would say!  We did see tons and tons of another kind of fish though… the Velella.  Also known as By-the-Wind Sailors, these guys were little jellyfish with a little sail that sits on top of the water and carries them around.  We never got a good picture with the large seas, but they look so funny!  The first time I saw one I thought it was a plastic seal from the top of a container floating by, but then we started to see hundreds of them!  We figured out that they were jellyfish, but had never heard of or seen them before, and looked them up as soon as we got to land.  They are very different from a regular jellyfish (they are more of a hydroid colony instead of a medusa, if you want to look that up…) and are about 7cm across.  They typically live far offshore and are just blown around by the wind on their sail, although they occasionally wash up on beaches by the millions if caught in the wrong wind.  Here’s a picture I found to give you an idea, I thought they were fascinating!

Another surprise was the birds that we saw!  As we sailed off the Oregon coast, we noticed that there were quite a few sea birds, and we figured we would be seeing less and less of these the further offshore we got, but we ended up seeing birds even as we neared 100 miles, then 200 miles and even 300 miles offshore!  These birds would skim right above the surface of the water, swooping up and down perfectly with waves, even in the large, mixed up swells.  It was quite amazing to watch them, and to wonder how they survived out in the ocean, so far from shore.  I did some research and believe these were a variety of Storm-Petrel.  It turns out these birds spend their entire life at sea, coming to land only to breed. Wow!

We also some larger birds out there, that had a huge wingspan.  We think these were the Black-Footed Albatross.  As we traveled further south off the Central-Southern California coast we saw another large bird soaring around, and some actually sitting on the water!  I think these guys were Sooty Shearwaters. 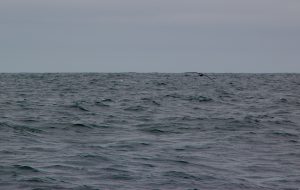 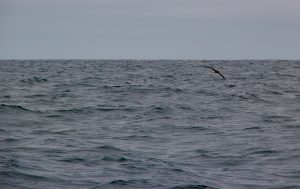 As we were approaching the Channel Islands, we began to see even more sea life, starting with a very cool sighting…

We spotted this guy, hanging out near the surface of the water… While that fin looks intimidating, it actually belongs to the largest (by weight) bony fish known in the world, the Mola Mola, or Ocean Sunfish!  These guys are super funky creatures, growing up to 14 ft across and weighing up to 5,000, they look like half of a fish!  They have a thick, flat head, two large fins on the top and bottom, and then their body just ends! 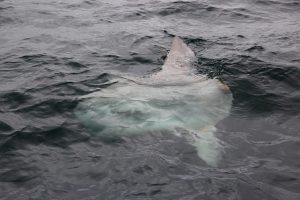 The other very cool thing we saw as we neared the Channel Islands was whales, lots and lots of whales!  When were about two days out from the Channels Islands and I was on night watch, I heard a very crackly, staticky Securité call from the Coast Guard come on the radio.  I couldn’t quite make out what they were saying but I swear I heard something about whales.  The next morning, right as I was climbing up into the cockpit to join Ty, we spotted a giant whale off on the horizon, jumping completely out of the water and splashing back down.  A few minutes later, we saw another big jump and a few tails!  We kept watching the horizon and saw big plumes of water as they exhaled air from their blowholes at the surface and dove down again.

Later that day, we heard the Coast Guard call again, there were reports of Humpback, Blue and Fin whales all transiting the vicinity!  We kept watching, and throughout the day we saw more tails, spouts, and big, long, sleek backs swimming through the water.  It was amazing to watch and some were very close to our boat, but it was so hard to get pictures, they were there for a second and then gone!  We noticed that off in the distance you could sometimes locate them by looking for flocks of birds, as the seabirds seemed to follow their path.

We learned that the Humpback are the more acrobatic ones, jumping out of the water, diving deep and flicking their tales up high.  They Blue and Fin Whales are much more mellow, and you generally only see their backs coming out of the water.  We know saw the Humpbacks, and while we aren’t quite sure how to differentiate we definitely saw one or both of the other species as well!  Very cool, and we hope we get to see more!

We saw a few dolphins offshore, but as we approached the coast, we saw tons of them!  They swam behind the boat for a while, then veered off on their own path.  The day we were leaving Santa Cruz to head for Santa Barbara, there were hundreds of them all around us, criss crossing in front of the boat.  It was quite amazing!

2 thoughts to “Wildlife at Sea”