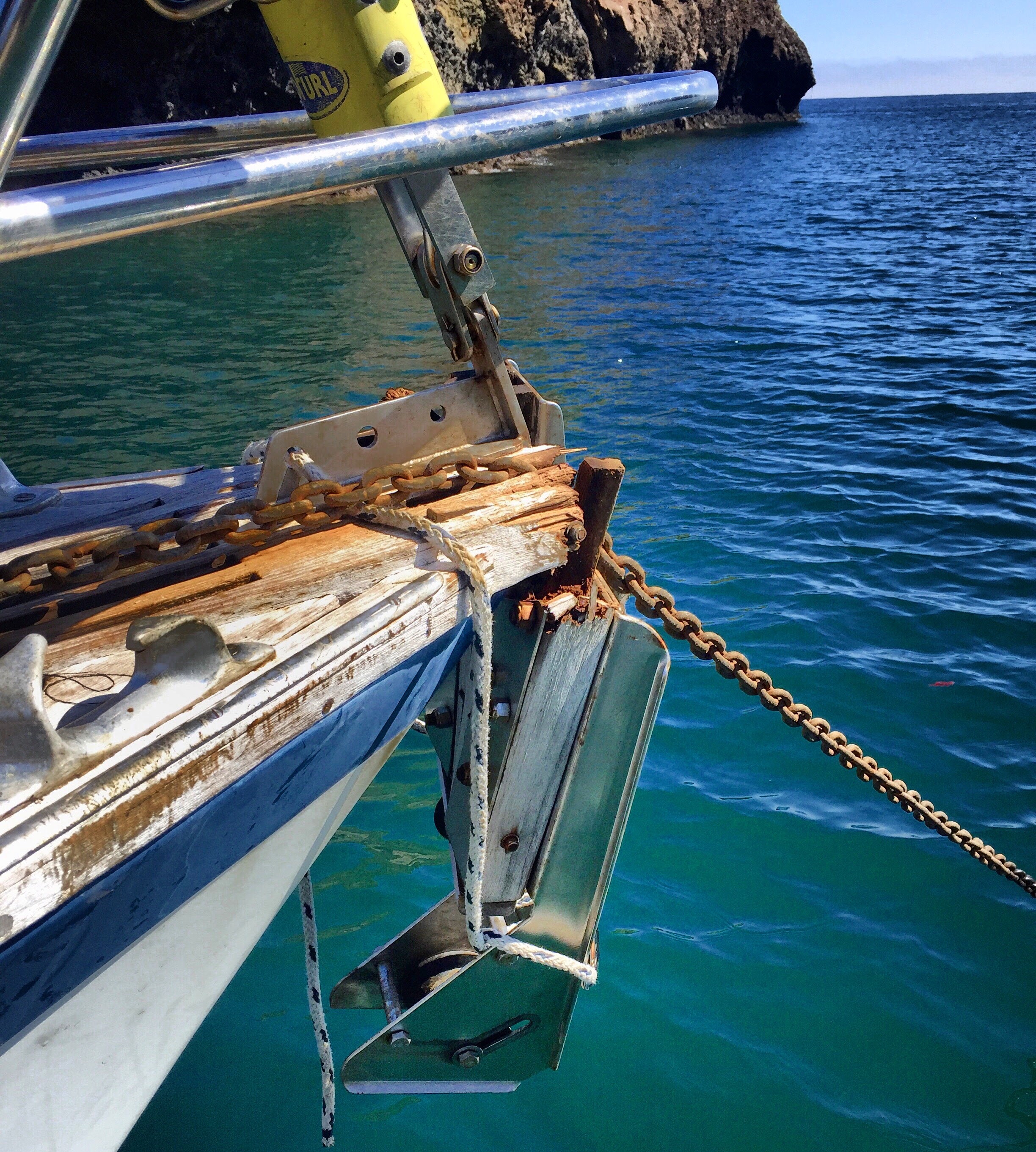 “Stop!  The boat just broke!”  Those were the words that I yelled out to Ty from the bow of Varuna at about 10:30 PM this past Saturday night…  Not the way we had expected our night to turn out.

We had just said goodbye to life near shore after a week or so in Santa Barbara.  We were so excited to get out sailing again, as our time in Santa Barbara had been full of mishaps and misadventures (more on that later).  We had gotten a late start, leaving at about 1Pm, but sailed out of Santa Barbara on a close reach with about 15 knots of wind, perfect!  As the afternoon went on, the wind and seas really started to pick up.  We reefed the main and put out the staysail, with the wind gusting to about 27 knots.  As always, Varuna handled great, but the swells were just so steep, choppy and close together that we really had to point into it and sail close hauled to avoid taking the waves broadside.  This took us further west than we had planned, but since there are plenty of anchorages on the north coast of Santa Cruz, we didn’t mind since it made for a slightly more comfortable sail.  After a very rough, choppy 5-hour sail from Santa Barbara to Santa Cruz Island, we navigated our way into Fry’s Anchorage.  Our cruising guide told us that this was one of the most popular anchorages and it was a Saturday evening, so we were expecting it to be packed, but to our surprise, there was no one else there!  We had to double check our charts to make sure we were in the right spot!

Fry’s was a welcome sight and we were so excited that we had ended up there because it was so well protected from the west swell that we had just sailed through, and it looked beautiful!  Our cruising guide (click here

for link) gives a detailed description of all the anchorages, but the anchoring instructions for Fry’s were a little vague… “Once you have a depth of 50 feet, choose your anchoring spot off the beach according to draft.  The best spots are tucked in under the western cliff, as close to the beach as you can safely allow.”  Varuna has a draft of 5’9″, which is quite a bit different than 50 feet…  So we decided that since we were the only boat there, we might as well get as close to the beach and cliff as we could, since that was the supposed to be the most protected.  We dropped the main anchor (our 33lb Bruce) in about 20 feet, and since we were so close to the cliff and it was recommended, we took the stern anchor out in Makara (our dinghy) and dug it in just off the beach.  Perfect!  We were both exhausted, and had really gotten beat up on the sail over.  We were so excited to just relax and rest!

Later that night, before we settled in to bed, we checked outside to make sure everything looked good.  If you’ve ever anchored out, you might be familiar with how different everything looks at night… Distances get warped.  For us, everything looks closer at night, whether its the beach, rocks, or other boats… For some reason, with less light everything feels so close!  And we were feeling like we were really close to the beach!  We checked the tides and saw that we had anchored at high tide, and low tide was still about 4 hours away.  It wasn’t a huge tide swing, where Varuna was anchored we had about 7 feet under the keel, and the tide was only supposed to drop 2 more feet, which should have been fine in the protected anchorage, with the the glassy flat water and no swell.  But since our guide had been a bit vague, we were worried that we were anchored too close to the beach.  So we decided to reset the main anchor a bit further out.

The plan was to slack the stern anchor, haul up the main anchor, drive about 20 feet further out from where we had dropped the anchor, set the main anchor again, and then tighten up the stern.  Probably not the best decision to reset the anchor at night, but nothing that couldn’t be done, and there we no other boats around to worry about.

When we anchor, Ty usually drives and I’m at the bow with the windlass directing him.  We assumed our regular positions and I began hauling the anchor up.  Since we have markers every 25 feet on our chain, it’s pretty easy for me to gauge when we’re about to pull the anchor off the bottom.  I could see the 25 foot marker, and knew we were about to break the anchor free, but the windlass seemed to be having a little trouble.  Instead of putting pressure on the windlass, we usually drive forward just a little and use the boat’s power to break the anchor free instead of stressing the windlass.  I directed Ty to give us a little kick of forward.  The chain pulled tight, and I thought we might have a fouled anchor because I couldn’t see or feel it break free right away.  I probably should have stopped to put the snubber on, but we had limited maneuverability, and were drifting a bit close to the cliff wall for comfort, so I didn’t really have the time to do that.  With the windlass brake on, I asked Ty to give us another little kick forward.  As he did, I heard an awful cracking sound, and watched with horror as the bowsprit folded down, cracking right off the front of Varuna.  That’s when I yelled “Stop!”

There was a lot of panic, shock and confusion running through my mind…   What had just happened?  What do I do now? We had to decide to do something quickly, since we were drifting rather close to the cliff wall.  Ty was doing his best to maneuver the boat, but that’s not an easy task while managing to also keep the slack out of the stern anchor rode.  I thought the anchor must be fouled, stuck under some giant rock that had been strong enough to rip our boat apart, so I figured we might as well lay the chain back out where it was for now, and deal with it in the morning.  I mean, if it was strong enough to do that, I think we should hold pretty well.  Our depth where we had been was fine, even with the tide change.  So I let the chain back out by hand, over the bow, watching the anchor pulpit swing off the bow of the boat.

Once we had safely re-anchored, we tried to get a good look at the boat.  It was dark, but there didn’t appear to be any fiberglass damage.  The bowsprit was loose, but hanging on somehow still, so we ran some line through it and tied it off to the boat, just in case it decided to fall off in the middle of the night.

The next morning, our first order of business was to go dive and check out the anchor, because at the moment we were stuck there.  We broke out our wetsuits, fins and goggles to go dive on the anchor and see what the heck it was stuck on, and if we were going to be able to break it free.  The water was nice, but wasn’t super clear, and although we were only anchored in 20 feet, we couldn’t see the bottom.  Now, we both really want to learn more about free diving, but we are definitely novices at the moment, and getting down that deep was a bit of a challenge, so I was worried how the heck we would be able to get down there and get the 33lb anchor out from under some monstrous rock.  Well we followed the chain, and eventually the anchor came into view.  To our surprise, it was sitting nicely in the sand, just like it should, not a rock to be seen around it!  We were a bit confused, and wondered what the heck had happened last night, but glad that we wouldn’t loose the anchor, or be stuck there.

Knowing that our anchor was fine, we went to go take a better look at the broken anchor pulpit.  It was hanging by a single bolt, and we either needed to secure it, or remove it to make the passage back into port.  I got in the dinghy below, and Ty worked on it from above.  We were able to take the nut off the bolt, and work it free, lowering it down into the dinghy.  As we worked on this, it became pretty apparent why it had broken off… the wood was soft, spongy and rotten inside, and crumbling all over everything!  Eeek!

As devastating as it was for this to happen to us now, with the condition the wood was in, it was bound to happen at some point.  There’s no telling how long it had been like that, it appeared that the rot had set in all around the through-bolt holes, causing a major point of weakness in a spot where there was a lot of stress.  When we bought Varuna, we in inherited a nice anchor snubber.  We always use this when we anchor, and assume the previous owners did as well since they seemed to be very meticulous.  If you’re not familiar with this, it’s a kind of bridle that goes on the chain to take the pressure off of the anchor pulpit and the windlass.  Ours has a chain grabber with two lines that we run back to the bow cleats.  Without the use of this, we could have lost the bowsprit under very different circumstances, while we were away or asleep in a windy or choppy anchorage.  Since we use the snubber, the only time there’s really any pressure on the anchor pulpit/bowsprit is when we are hauling the anchor up.

Reflecting as we sailed back towards Ventura trying not to think about how expensive it was going to be to fix, we determined that it probably broke in the best possible scenario… First, it didn’t look like it had damaged anything else.  Second, it had happened in a calm anchorage where we could easily go down and check the anchor, haul it in by hand and deal with taking the bowsprit off and securing it.  Third, we were only a short sail away from the Southern California coast with multiple boatyards and people that could help.  And of course, we still have our insurance while in the US!  So we are trying to look on the positive side!

We will be land-bound for a while, but hope to re-engineer a better, stronger design, likely made from stainless instead of wood this time around.  Stay tuned for updates!

Related Articles
Breakdowns, Failed Repairs and Struggles in Zihuatanejo… Because when it rains, it pours!
Surviving the Summer Heat: Sea of Cortez Update
Out of the Harbor and Back on the Ocean, but now with Boat Troubles… (Part 2)