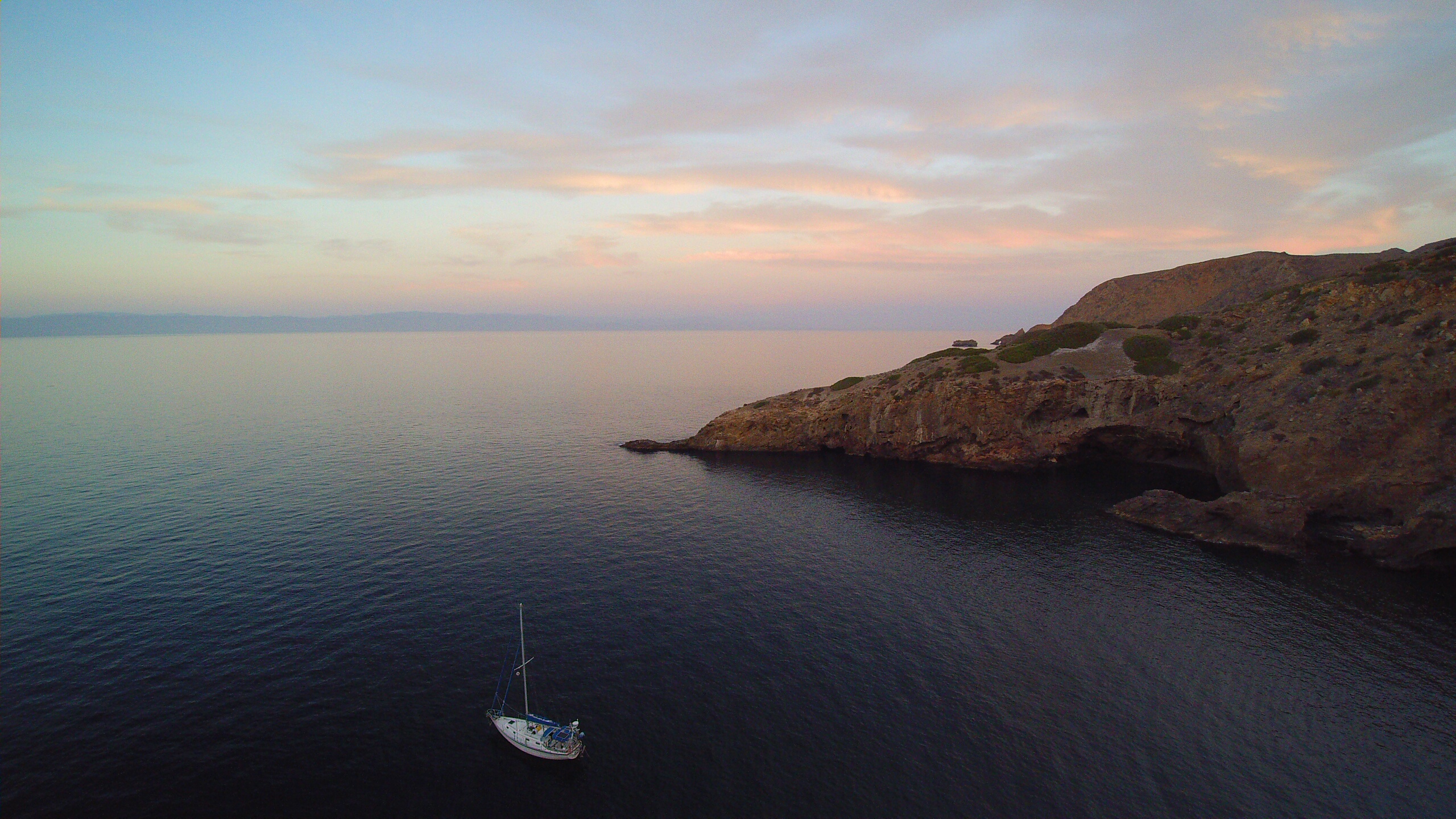 After 6 weeks between hotels and a torn apart boat in the boatyard, we slept so well at the quite anchorage of Cueva Valdez, away from land, hanging on our new Rocna anchor.  We wanted to get an early start, because we had a long day of sailing ahead.

Our goal was to make it up to San Miguel Island to do some hiking with the ranger there, exploring the petrified forest and sea lion rookeries.  We were timing this visit with a really calm weather window, right between the seasonal Santa Ana winds that were blowing over the weekend and low pressure trough that was expected to arrive and bring strong NW winds by the next weekend.

However, we had gotten out of the boatyard later than expected… yes it had taken weeks longer than expected to repair, but with the end in sight, we thought all would be completed by Friday, but of course, at the end of the day Friday, there was still one thing left to be done, so we had to wait through the weekend, finally paying the final bill right as the office closed on Monday afternoon.   This left us with not much time to get out to San Miguel before the forecasted 40 knot winds.

Before leaving the anchorage in the morning, we decided to jump in and finish giving the bottom of the boat a complete clean before getting underway so we would have less drag and more speed.  There were a lot of miles to sail if we wanted to make our San Miguel trip happen.

We pulled out of the anchorage, sailing nicely with 8-9 knots of winds.  Not bad, for early morning, right?

Well, after less than hour, the winds completely died.  If we were going to go anywhere, we would have to turn on the engine and motor, but as soon as we did, we had the same problem with the alternator as the day before, but it was happening more frequently.  The engine was running fine, but we couldn’t get the tachometer to hold a reading, it just sat at zero.

A few miles off the coast of Santa Cruz, with no wind, what better time to try to fix the problem?  We pulled everything out of the cockpit locker so Ty could go down and get to work.  I kept watch up top, making sure we weren’t drifting too quickly and passed down whatever tools Ty needed.

We were fairly certain that the belt on the alternator was loose and needed to be tensioned, however our handy Beta Marina Manual was very vague and didn’t show where or how to do this.  Crouched down in the locker, Ty was able to find the correct nuts and bolts, and got to work trying to tension it correctly.

We thought we had it fixed, and let the engine run in idle.  All seemed good, so we put everything back together, excited to be back on our way.  However, just as we had put everything back in the locker, the tachometer dropped down to zero again.  So as soon as we had everything put away, we pulled it all apart again, and Ty got back down to tension the belt some more.  He worked and worked and had it just about as tight as he could get it, but we decided to let it run for a while to test it before putting everything away.  Well, it’s a good thing we did, because a few minutes later, we had the same problem again.

With the tension as tight as we could get it, we decided to try replacing the belt.  I dug down to our spare parts storage, under all of our dry goods in the galley, and pulled out our spare alternator belt.  The old one looked fine, not worn at all, but we didn’t know what else to try.

Ty got the new belt on there and tried to figure out how to tension it correctly.  We started the engine up, and it seemed to be working!  Woohoo!!  Only by now, 3 hours had passed and there was no way that we were making it to Santa Rosa, or San Miguel today.

We decided to make the best of it and head for Forney’s Cove, where we had hoped to end up the day before.  We had received news that some other cruiser’s, Scott and Laurie on Muskoka from Off the Starboard Hull, were in the area.  We had been messaging these guys from a few months, as we were both planning on pushing off from the Northwest around the same time, so we were excited to meet in person to share stories and plans.