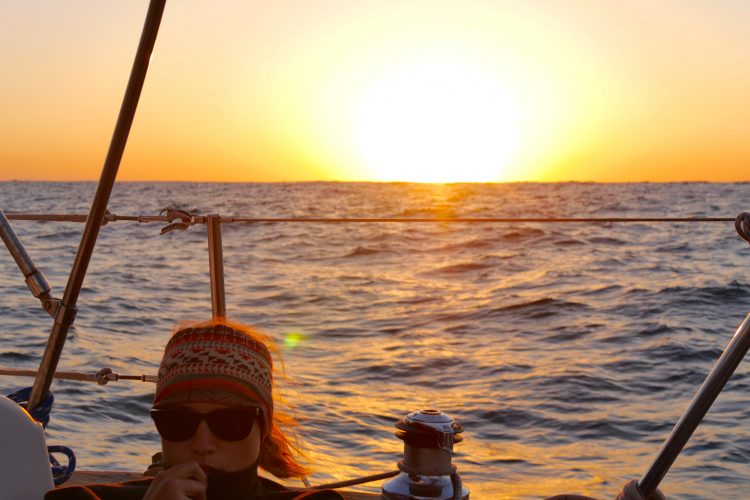 Well we finally made it!  We are in Mexico and have been enjoying life the past few weeks here!  We have spent weeks sailing through big rolly swells, enjoying some spectacular scenery from isolated anchorages, catching fish, exploring small villages, hiking, and seeing some incredible wildlife!

WHERE WE’VE STOPPED ALONG THE WAY:

Our first stop was Ensenada to check-in to the country.  We left San Diego on a Friday afternoon, planning to sail/drift/motor through the night, as there was no wind in the forecast for several days.  Leaving in the afternoon allowed us plenty of time for the passage so that we could arrive in daylight.

Arriving into Ensenada on Saturday morning, we pulled into Cruiseport Village Marina, as there is no anchoring allowed in Ensenada harbor.  Then, with the Port Captain’s office closed and a Mexican holiday on the coming Monday, we waited until Tuesday to check-in to the country.

The check-in process was actually very smooth and easy, with the marina preparing the majority of the paperwork.  Having taken care of canceling the boat’s previous import permit at the Mexican consulate prior to arriving also smoothed the process.  After a few wrong offices, we also found the place to get our permit for all of Mexico’s Natural Protected Areas.  Kind of a like a National Park permit, this is good for 1 year and will allow to visit any of the protected areas in Mexico.

About 60 miles south of Ensenada, Bahía Colonet was our first anchorage.  Located in the lee of Punta Colonet along large, cliff walls, this was a rolly but nice anchorage.  We spent a couple nights here, resting after a rough overnight sail from Ensenada.  We actually didn’t even leave the boat, but did enjoy a late Thanksgiving dinner and some movies.

Another 30 miles south and we reached Isla San Martín, which is actually one of the cones of a old extinct volcano.  We enjoyed great views of the other volcanic cones on the mainland and a little fisherman’s camp.  Here, the fisherman went out every morning to check their lobster pots, then brought thier catch back alive and put them in cages tied to buoys off the beach, waiting to be picked up and taken to shore.

The fisherman also came and offered us lobster and we traded them 4 cans of chicken for 4 lobsters.  We don’t know many recipes for lobster, but we made a pasta with cream sauce and lobster, and a boiled the heads to make a base for lobster chowder.  Both were very good!

We tried hiking to the top of the small island, but there were no trails and lots of spikey cactus that stuck in our hiking boots, and tried to stick to our legs, so we turned around and wandered around a beautiful little lagoon full of sea lions.

Just 15 miles down and around a point from Isla San Martín is the large Bahía San Quintín.  We were amazed at how huge and empty this bay was!  We spent several days relaxing here, and the only other boats we saw were an occasional panga driving by.  The town here is actually 7 miles up and estuary and then a few miles inland, so we didn’t bother with a trip there, just enjoyed the hammock, a few boat projects and relaxing.

About 130 miles south of San Quintín, the San Benitos are a group of 3 islands Este (east), Centro (middle) and Oeste (west).  We anchored off a very cute little fishing village on Isla Este.  The water here was deep (the shallowest place we found to drop the anchor was at 45 feet), but it was incredibly clear, and I could see the anchor hit the bottom 45 feet down!  The islands looked incredible, especially the peaks on Isla Oeste with Cedros Island in the background!

After reading online that there was a trail around the small island, we set off on a hike.  We found all kinds of sights along the way… elephant seals, a whale carcass washed ashore, Guadalupe fur seals, baby elephant seals, a dolphin carcass, an abandoned lighthouse, lots of remnants of all kinds of bird and sea creature skeletons, and some great ocean views and desert plants!

Isla Cedros is Mexico’s largest Pacific Island, at 20 miles long with two peaks that are close to 4,000 feet!  We rounded the southern end of the island, taking in the large salt processing plant.  We could see huge mounds of salt waiting to be loaded on barges to the mainland.

As there is a Port of Entry here, we had to call on the radio to advise them when we arrived. I was quite happy that I accomplished my first Spanish radio conversation!  We anchored just to the north of the breakwater off of Cedros town.  This was a pretty picturesque anchorage… Adorable little village, and huge colorful mountains surrounding it.  We were the only boat there other than the pangas and it was perfect!  It was a bit rolly though, so we put out a stern anchor to try to point into the swells, which always seemed to be opposite of the wind direction.

For the most part, we’ve had some really good sailing so far in Mexico.  There have been a few early mornings that required motoring, but for the most part everything has been straight down wind.

Our biggest challenge has been trying to overcome irregular swells off the beam/aft quarter accompanied by light wind on a downwind run.  With only 5-7 knots of wind behind and 4-5 foot swells off our aft quarter, the boat rolls around quite a bit making the sails flop and snap back and forth.  We’ve found that using the whisker pole to pole out the genoa helps quite a bit, and we tighten up the preventer as much as we can to try stop the boom from slamming around, but sometimes it seems hopeless.

For the most part, we’ve had some good sailing days though, allowing us to make really good time.  Sailing to the Benitos we had a steady 15-22 knots of wind and we flew down there, and had great wind leaving to sail to Cedros.

From Cedros, to make Bahía Tortugas before dark, we left in the early morning with zero wind and the engine running.  A couple hours in we snagged one of the hundreds of crab pots and I had ot jump in the cut us free.  To our surprise, right around noon, the wind picked right up and we had awesome sail with 12-18 knots of wind the rest of the day!

We were so excited to do some fishing and see what we would catch in Mexico, after hearing it’s a great place for Mahi, Yellowtail Wahoo and Barracuda.  Whenever we’re on the move we trawl two handlines out the back, hoping to snag something good!  Well, all we’ve caught is Bonito!  And maybe a small mackerel or two…

On our sail from the Benitos to Cedros we caught a relatively large Bonito and decided to keep him.  That night, we fried him up, using instant mashed potatoes for breading and making a tartar sauce out of mayo and relish, with a fresh coleslaw on the side.  It was delicious!  But really, what doesn’t taste good fried?