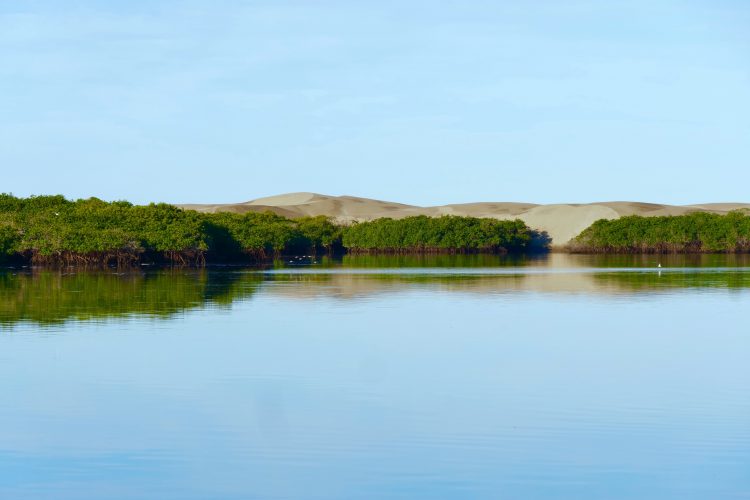 We found a hidden gem on Mexico’s Baja Coast!

When we set out on our journey down Mexico’s Baja coast, we expected the scenery to include lots of desert, rock, cactus and mountains.  That has certainly been the case for most of the coast, however we recently discovered some absolutely incredible mangroves in a place that we never would have thought to venture…

We were lucky to meet a family aboard the sailboat Larki in Bahía Tortugas, and quickly became great cruising friends.  They described these incredible mangroves, with amazing wildlife and beautiful scenery way up in the Northernmost part of Bahía Magdalena, all the way up to Boca de Soledad on the Pacific coast.  They had visited the area when cruising several years back and were eager to return.  We would have never thought to venture up there, as both the cruising guides that we have totally skip over the area, discouraging anyone from venturing up into the area, as the channels are uncharted with many large sand bars. However, it turns out that there is a pretty good channel all the way up, and if you go at low tide it’s very easy to see where the sand bars are. 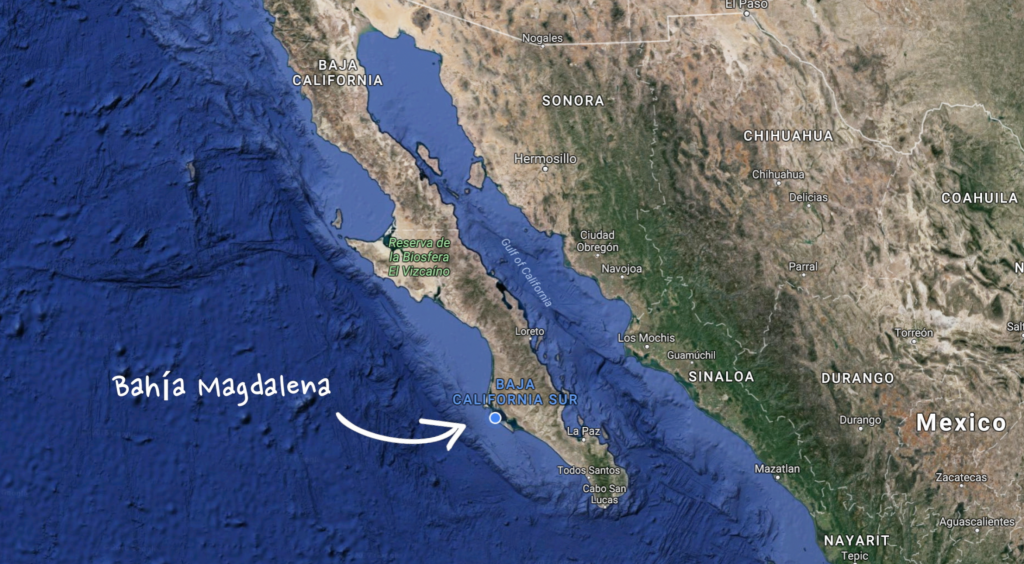 As we sailed into Puerto San Carlos, we followed the somewhat narrow “N” shaped channel that you have to zigzag across to reach the town.  From the Google Earth images overlaid on our charting software, it was very easy to see where the shallow spots were, and they lined up pretty accurately with what we saw visually.  So we downloaded some more Google Earth files for the mangroves, and again, could see the deep channel very well.  I think we got lucky, as the Google Earth images for the area had just been updated in 2016.  Then, while in San Carlos, we ran into Larki again, who had just returned from a week or so in the mangroves with a clear track plotted on their Navionics charting software. 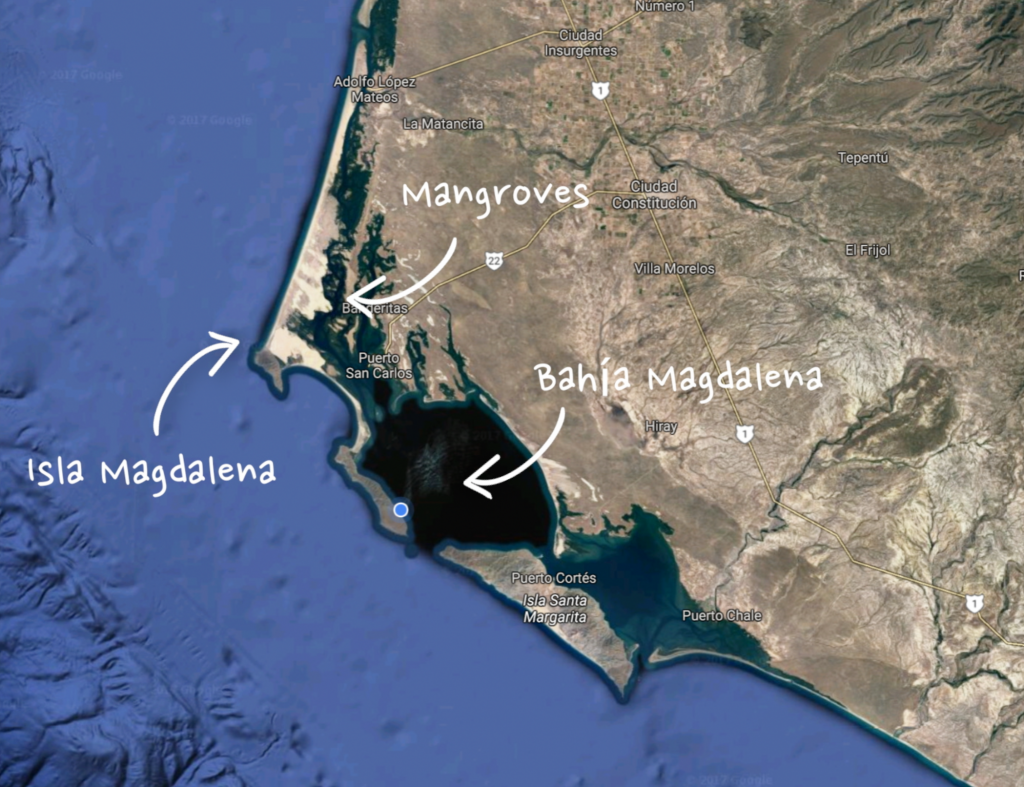 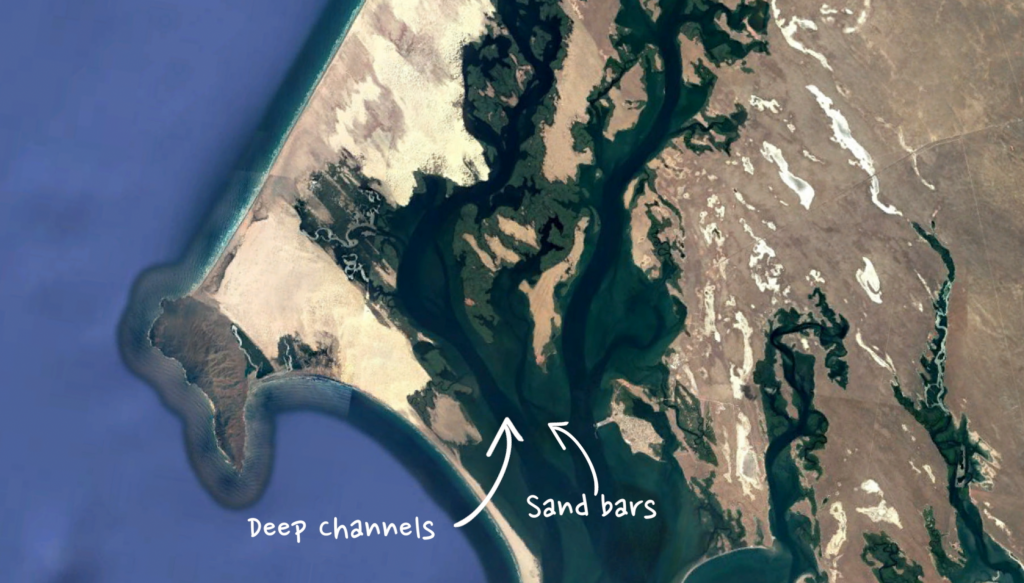 With Google Earth as a chart and a track plotted, we headed off up into the uncharted mangroves!  It was absolutely beautiful sailing, with bright green mangroves on either side, and you could easily see light spots where the deep channel cut up into a sand bar.

Of course, even though it was narrow, we tried to sail it rather than motor… we figured it was just like sailing back in the Columbia River in Portland, where we learned to sail, tacking every few minutes against wind and current!

While we did have a great sail, we also managed to run aground… by means of totally not watching or paying attention.  I (Hillary) was down in the galley, making french toast for breakfast, watching the screen at the nav station that showed us sail along on the Google Earth image, telling Ty when we were getting close to the edge of the channel and needed to tack, and Ty was watching out in the cockpit, as he could see the edge of the channel pretty clearly.

Then, Ty came downstairs to the nav station to load the next section of charts on the computer.  With no one looking at our position on the map, and no one looking out in the cockpit, we were sailing along at about 5 knots and reached the other side of the channel a bit quicker than we had expected, finding the sandbar with a big thud, knocking us back as the keel slammed into it.

We both jumped into the cockpit and could see the sandy bottom only a few feet below us and the deep channel just behind us.  It would have been easy to spot if one of us had been paying attention!

Ty quickly jumped in the water to check if the rudder and prop were clear, both had a couple of feet of water around them.  Luckily, we already had the sails up to help us heel over a bit.  Ty started up the motor, put it in reverse, and we both hung off the shrouds on the leeward side to help us heel us a bit more.  We slowly started to slide back, and in a minute we were free!

Needless to say, for the remainder of the trip of the trip up, one of us stayed in the cockpit and we kept a close watch on the Google Earth image.

We stopped near some large sand dunes and dropped anchor.  This area had the most amazing contrast between bright white sand dunes, deep blue water and bright green mangrove trees.  The water is all salt water, and the mangroves are protected by Isla Magdalena, separating the area from the open Pacific Ocean the the Northeast.

Near one of the narrower stretches of Isla Magdalena, we headed out for a hike across the dunes to the Pacific ocean.  These sand dunes are huge, and at times it was easy to feel like you were in a desert in the Middle East, looking out and seeing nothing but sand.  Along the way was saw tracks from coyotes and fox and a few interesting desert plants.

We could hear the ocean waves crashing before we reached the Pacific.  The fresh, salty air smelled so good.  As we neared the beach, all sorts of things started to appear in the sand… shells, bottles, pieces of rope and bones, lots of bones…

This was a beachcomber’s paradise, and we spent hours walking along the edge of the sand dunes near the beach, finding all sorts of treasures.  There were thousand of all different kinds of seashells, the most interesting of which were the combed venus clams that have long spikes protruding from the edge of their shells.

We found tons of turtle shells and bones and learned that sadly, many turtles are caught and killed in the nets of shrimp boats.  There were also lots of vertebrae from dolphins and whales scattered about, along with sea lion skulls.

We had heard that there was good fishing around the mangroves so we decided to do some spearfishing; around slack tide we slid on some wetsuits, grabbed our Hawaiian slings and hopped in the dingy.

Sadly, we didn’t have any luck finding fish, but it was absolutely beautiful.  Underwater, there were literally thousands snails covering the sandy bottom.  We hung out near the edges of the mangroves, waiting for the fish.  Looking into the mangroves it was like looking into an underwater forest.  Above, there were green leafy plants, and I even swam right up to a green heron.  We saw a few fish darting around in there, but none close enough to spear.

So moral of the story is, there are some amazing places to be explored here!  This has to be one of our favorite places so far.  Goes to show that it pays to go a bit off the beaten track and do some exploring of your own!