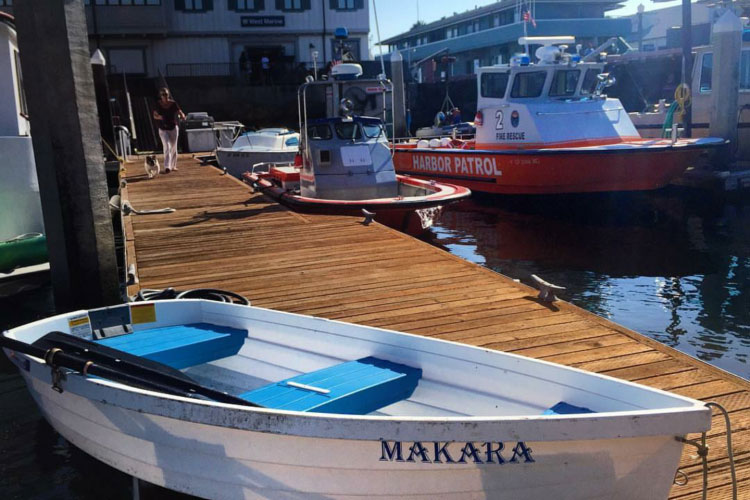 As you my remember, we’ve had a number of incidents with our dinghy, Makara.  First, she went for a little joy ride for a couple of days in Santa Barbara during Fiesta weekend, but was kindly returned to the harbor patrol.  Then, only a few days later, one of her oars snapped and we ad to replace the set.  And then, of course, in San Diego both of those new oars were taken from her at the dinghy dock, leading us to get new wooden oars with holes drilled in the paddles for a locking cable.

Well, we are very sad to report that we’ve had more bad luck with our faithful dinghy…  This time, I think we’ve lost her for good.

While anchored in Puerto San Carlos inside Bahía Magdalena, we left her tied off to the back of the boat at night, as we always do while at anchor.  When we awoke in the morning, ready to go to shore, we found a line trailing off the boat with no Makara attached.  One of the other sailboats anchored nearby, shortly discovered that his line had been cut, and his big, rigid inflatable dinghy and 15-horsepower outboard had been cut free from behind his boat.

Luckily, there was one other boat in the anchorage, our friends on Larki whom we met in Bahía Tortugas, who had not lost their dinghy.  Thank goodness for that!  While we had gone to bed early along the the other sailor who lost his dinghy, we later discovered that Larki had friends in town visiting and had been up past 1am, luckily deterring anyone taking theirs.

The kind family on Larki, hopped in their inflatable and headed over to pick us and the other sailor up, providing a much needed ride to shore.  We headed into town to speak with the Capitania del Puerto and file a report.  After the Port Captain took a few notes he recommended that we talk with the police as well.

Around the corner at the police station, we told our story again, and the police began what turned out to be a very long report process.  We described the incident, our sailboat, our dinghy, the hour that we last saw Makara and when we discovered her missing, gave copies of our ID’s, boat documentation and pictures.  Then, one at time the police filled out a report by hand.

Next, we went to another building, where we talked with the local detectives, again showing pictures and describing what happened.  They offered to take us out on a search on panga (a small local fishing-type boat).  Ty and one of the other guys went with the two detectives, while Hillary and the sailor from the other boat stayed behind in the office and began to transcribe our story to another gentleman who completed a typed report.

Ty definitely got the better part of the deal there.  Aboard the panga, the guys flew around the bay, checking some spots they thought the boats could have been stashed away.  They explored up small channels amongst mangroves, found some people they think were fishing illegally, and then startled a group of guys dinghy for local clams called “chocolates.”  No one knew anything about the dinghies and they were nowhere to be seen, however the guys digging for clams handed over a huge bag of “chocolates,” which turned out to be quite tasty!

When Ty and the guys returned, Hillary had finally finished up a grueling day of paperwork.  The police guys definitely seemed to have gone above and beyond.  We spoke with a few of the local “big wig” guys in town who work in the local tourism industry.  They were very sad to hear of our loss, as it hurts them long-term in terms of reputation.  While we understand that these things can happen anywhere, many others are quick to assume and generalize that this kind of incident makes the town “unsafe” or that “this kind of thing always happens in Mexico” – even though we had things stolen from us twice while in the US!  We absolutely love this little town, and wouldn’t discourage anyone from visiting at all!

The tourism guys took copies of our dinghy pictures and we exchanged emails so that they could keep their eyes and ears out as well.  It turns out, that the small community of Puerto San Carlos has started growing recently, and the locals said that there are a lot of new people in town, which is who they suspect may be the culprit.

While we are very sad to have lost Makara, we are very excited about our next dinghy…  We did a bit of asking around here, and even called a few places in La Paz and considered driving over to purchase a dinghy, however we weren’t able to find anything that suited our needs.  We loved having a hard-sided dinghy and did not want to got he inflatable route.  So instead, we decided to build our own!  More on that soon… 🙂

7 thoughts to “We’ve lost our dinghy… this time for good.”