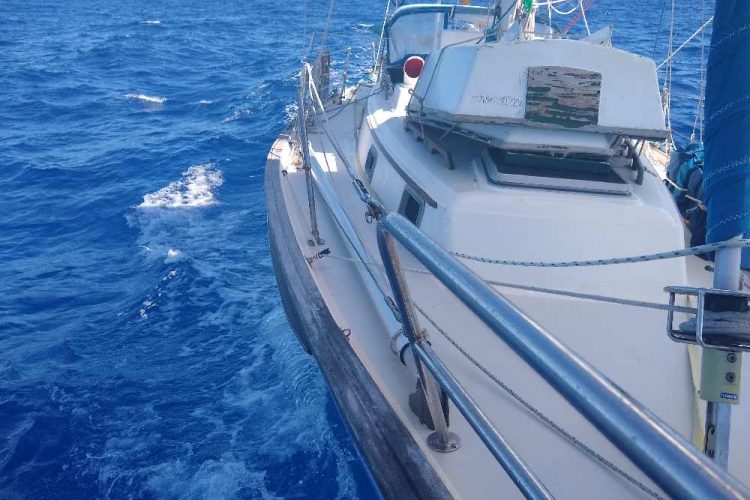 Current position as of 0000 UTC July 06 is 23°41’ N 158°14’ W Current Heading: 0°T Total distance made good (DMG) = 132 nm DMG last 24hrs (0000UTC-0000UTC) = 132 nm Engine hours = 1.5 Avg true wind speed (TWS) = 9.4 kts Avg speed over the ground (SOG) = 5.7 kts Avg swells = 2 ft Recap of Day 1 Well, it’s official, we are underway and headed North once again from Hawaii to Puget Sound! This time, it’s just the two of us onboard Varuna. After spending the day at Pokai Bay on the Western shores of Oahu, where we spent several hours cleaning Varuna’s dirty bottom, and one last full night’s sleep, we hauled up anchor admist dolphins, turtles and the 4th of July craziness of tour boats and paddleboarders. We had a nice light breeze, but thanks to the land effect, the wind was constantly shifting around on our nose, preventing us from getting out away from the island. Finally, after going nowhere, tacking back and forth in front of the anchorage most of the afternoon, we started the motor and headed out beyond the westernmost part of the island, where we picked up some awesome wind! After rounding the point, we had a steady 14 to 16 knots of wind right off the beam and we were flying along at over 7 knots. As we put some distance between us and the point, the winds settled down to about 10 to 13 knots, but we kept up a great speed, enjoying an absolutely spectacular sunset that seemed to go on for hours. Paired with the little sliver of the waxing moon and little bursts of fireworks on the shrinking shores of Oahu, it was a memorable departure. Overnight the winds stayed steady and we continued making good time. A very light mist of rain briefly passed over and then cleared up and Ty saw his first shooting star of the trip, as the glow of lights from Oahu and Kaui faded into the horozon we enjoyed a very comfortable overnight sail. Cheers from us, and here’s to hoping this great weather sticks around! Hillary & Ty
Sent from Iridium Mail & Web.

One thought to “Day 1 A good start to the passage”