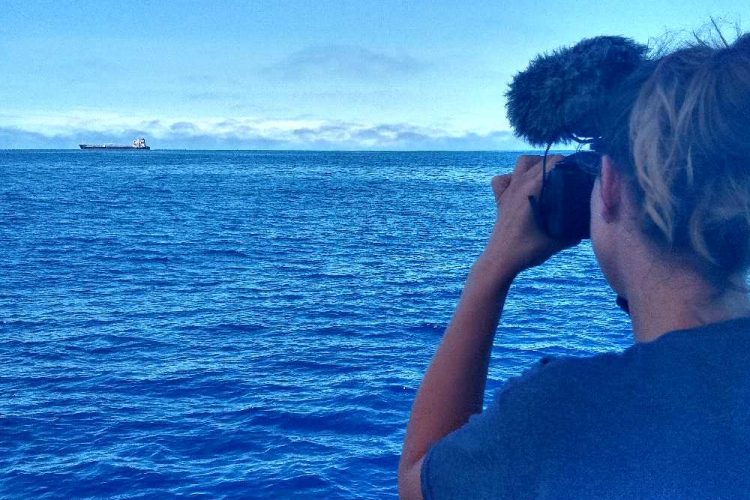 Current position as of 0000 UTC July 19th is 39° 08’ N 152° 37’ W Current Heading: 40°M Total distance made good (DMG) = 1201 nm DMG last 24hrs (0000UTC-0000UTC) = 64 nm Engine hours = 0 Avg true wind speed (TWS) = 4 kts Avg speed over the ground (SOG) = 2 kts Avg swells = 1.5 ft Recap of Day 14 What a great start to the morning, we surprised a large pod of dolphins that were feeding and then when they noticed us slowly sailing by they took off in synchronised leaps out of the water about 15 across. Of course truth be told they probably knew it was us all along but sometimes you have to make up stories to tell yourself just to keep things interesting out here, like all those pots of gold we have been collecting at each rainbow. Should we post GPS postions for the treasure hunters? There are large patches of fog and/or mist on the water that we had not really caught up to but we could tell when we were inside of them with the constant wet mist hitting our faces even though the skies are clear and blue, as the afternoon progressed however we did enter our first patches of real fog that reduced visibility to 100 metres or less at times. We spotted our second ship in 14 days at sea today this one would be close with an alarm on our AIS for less than 1 mile seperation, we had a good visual on the Aegean Wave at 5 miles out at the time and decided to give them a call on the radio to let them know we would alter course and go behind them. Most of the ships we have talked with over time seem to ask for a 1 mile CPA (Closest Point of Approach) which makes sense and might be their SOP. The bloke we spoke with on the bridge was friendly and paused before responding with “Where are you going?” followed again with “and where did you come from?” which gave us a good chuckle for the rest of the day. Of course at the time we were probably heading around 340 degrees magnetic and probably looked like we were lost, many times the ship crews don’t understand the dynamics of sailing boats and why they just don’t go “straight”. Anyway he wished us well and we got to thinking if he was playing putt-putt on the bridge since it was such a calm day, if anyone is curious enough to look them up they are heading to Ulsan (Is that Korea or Siberia?) and will not arrive until the 1st of August. Finally we know we are making progress when someone else will arrive after us, we are hoping for a July 30/31st arrival into Victoria, Canada or Port Angeles, USA. On the food front we used the last of our delicious Mahi Mahi for fish sandwiches today and roasted up our last eggplant for babaganoush to go with the fresh pita bread, the sun shone bright for most of the day so out came the small Nutri Bullet and we roasted and made some tasty peanut butter and threw some garbonzo beans in the pressure canner. We have this recipe we found for chickpea and nut butter cookies that Hillary has been waiting to try, no excuses now even though I have been requesting choc chip cookie dough for days I am but a hostage and waiting to be rescued…send help! A light breeze kept us moving throughout the night, we started watching a movie before calling it quits for the night and we had a number of noisy little birds flying around us, we have seen them before and think they are a Petrels which are about 12 inches long with a wingspan of maybe 18 they spend their whole lives at sea except for breeding. If you were wondering about our friendly albatross well he/she is still with us day after day and it feels good to have a following fleet, maybe tomorrow Hillary can tell you the story of the pilto fish. Cheers and good night. Ty & Hillary P.S. If sending rescue help for Ty please include Milo and Vegemite I am now out.