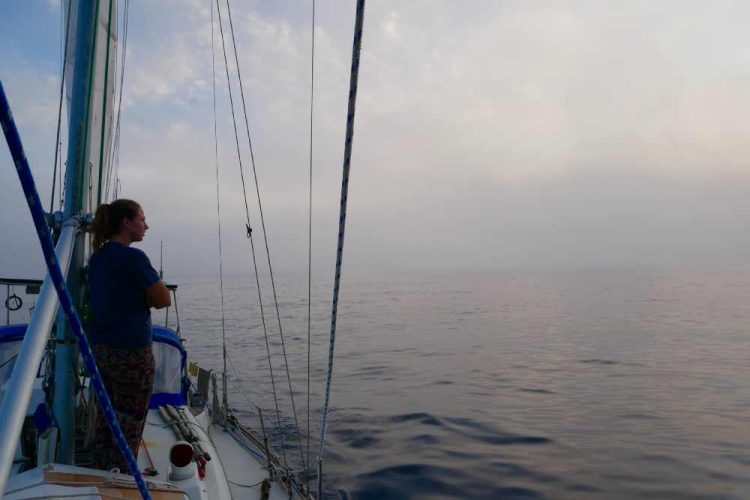 Current position as of 0000 UTC July 19th is 39° 46’ N 151° 18’ W Current Heading: 40°M Total distance made good (DMG) = 1271 nm DMG last 24hrs (0000UTC-0000UTC) = 70 nm Engine hours = 3 Avg true wind speed (TWS) = 3.75 kts Avg speed over the ground (SOG) = 2.5 kts Avg swells = 1.5 ft Recap of Day 15 Well, it’s been another very slow-going day out here in the big, blue ocean. We still seem to be in the middle of that high pressure system, with little to no wind, spending more time drifting than actually sailing. The wind has been coming more behind us lately, so we put the genoa out on the whisker pole and dropped the main. Going without a mainsail makes it a much rollier ride, as the main provides a lot of stability, but for downwind, a poled out genoa does a better job of capturing the wind, and with the very light winds, we don’t want the main blocking any of those precious breezes. We continued sailing in and out of misty fog banks, and heard a few planes pass over – we must be under some sort of flight path. Come afternoon, we got tired of rocking and not going anywhere so we started the engine and motored for a bit. Before we did so, we opened up the fuel tank dipstick to check and see how full the tank was. Before leaving Honolulu, we had filled a couple of jerry cans, but had not topped off Varuna’s tanks since leaving Costa Rica. Our checked showed that we had about 20 gallons remaining in the tanks, plus the 10 gallons in jerry cans on deck. We motored for 3 hours, hoping for some wind to fill in, but our weather downloads that called for very light to nonexistant winds seemed to be accurate, so we turned the engine off and drifted the rest of the night. The motor did give us some hot water and we splurged with hot showers in the evening, which was a big treat. Several hours after the sun went down, we put the genoa back out on the pole, hoping to capture a little breeze. As we worked on deck, we turned the spreader lights on to be able easily see, and noticed some shapes appear in the water next to us. We realized they were squid, swimming along, attracked to the light! It was a misty night, and in the light the mist in the air looked like snow. Here’s to hoping for wind and sailing someday soon! Hillary & Ty