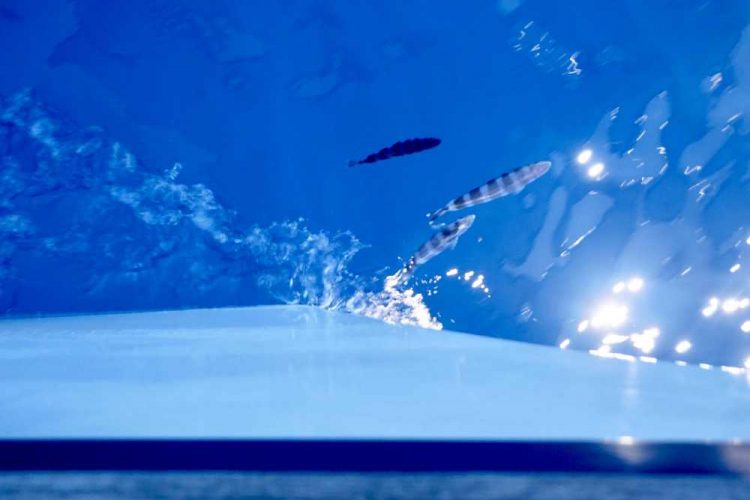 Current position as of 0000 UTC July 20th is 40° 59’ N 149° 17’ W Current Heading: 40°M Total distance made good (DMG) = 1392 nm DMG last 24hrs (0000UTC-0000UTC) = 121 nm Engine hours = 0 Avg true wind speed (TWS) = 8 kts Avg speed over the ground (SOG) = 4 kts Avg swells = 2 ft Recap of Day 16 The day started out just as slow and rolly as our last several days, as we drifted along with the genoa out on the whisker pole in incredibly light winds. The days have been a mixture of sun mist, fog, clouds and then back to sun. I deemed it nice enough in the morning to do a little laundry, and hoped it would stay clear enough to dry, which it mostly did, but I think a second day of drying will be required to really dry everything thoroughly. At some point we raised the mainsail to try to stabilize some of the rolling, and not long afterwards we were below and heard something small fall and hit the deck. We went upstairs to discover the clew (the back corner of the mainsail) totally loose. This is usually held in place with a large clevis pin, which is what we had heard fall, and it miraculously, was still sitting on the very edge of the gunnel near the cockpit. Somehow the cotter pin holding it in had worked it’s way out. Luckily, we have plenty of spare cotter pins, and with the clevos pin still aboard, it was an easy fix. In the evening, we crossed into lattitide 40, which is very exciting! We are certainly making progress north now. Towards evening we also started to get a bit more consistent winds fill in, and as you can tell by the numbers we have actually gotten back to sailing, which is so exciting! We should be clear of the center of that high now and expect good sailing conditions for at least the next several days, if not the remainder of the passage! All the best! Hillary & Ty PS… I’ve been in formed that I was supossed to tell you abou the pilot fish yesterday, but missed getting that into the post. Two days ago now when I was up on the bow spotting dolphins, I looked down into the water and noticed several pilot fish, who were swimming along right in front of the boat, seeming to be riding our bow wave, just like dolphins! We’ve noticed these fish with us for the last several days, but this is the first time we’ve seen them up at the bow like that. These fish actually appear in legends as old as the ancient Greeks, thought to guide sharks, whale, lost ships and swimmers and here they seemed to actually be “piloting” Varuna! While they don’t actually “pilot,” they do follow larger animals and ships as a way of hitch hiking and finding food. Pretty cool – you should look them up!
Sent from Iridium Mail & Web.