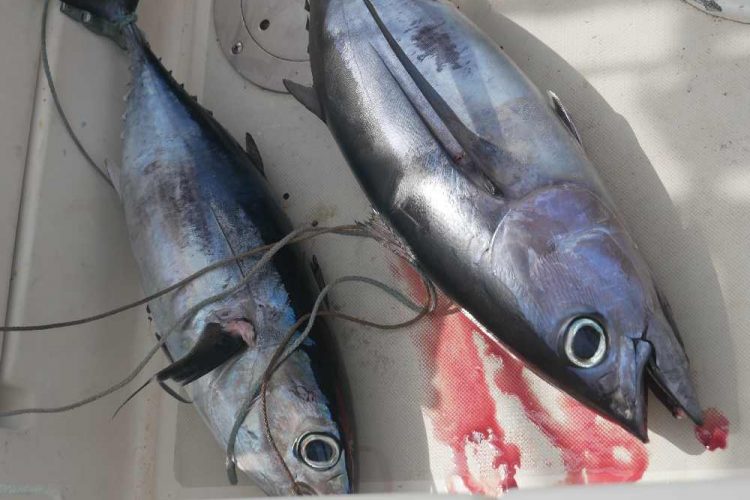 Current position as of 0000 UTC July 24rd is 44° 26’ N 142° 27’ W Current Heading: 50°M Total distance made good (DMG) = 1762 nm DMG last 24hrs (0000UTC-0000UTC) = 116 nm Engine hours = 0 Avg true wind speed (TWS) = 10 kts Avg speed over the ground (SOG) = 4.6 kts Avg swells = 2.8 ft Recap of Day 19 We are officially in albacore tuna territory! The day started off with a big hit on the fishing line, and when I went to pull it in, there was something big, strong and heavy back there. We got it close to the boat and could see silvery flashes in the water, but the fish somehow managed to get himself off, luckily with our hook still intact. We picked up a cedar plug lure before leaving Honolulu, and it has been working hard for us, getting lots of hits and taking a beating with lots of teeth marks all over it. We haven’t had one since we lost our last cedar plug off Baja over two and half years ago. Not to worry about the lost fish though, because a few hours later we had another hit, successfully hauling in a nice big albacore tuna! This guy was probably over 15 pounds, a brilliant blue on top with a long pointy pectoral fin and a big eyeball. Tuna are notoriously bloody fish, and we came up with a great way to manage the mess without much cleanup. As I pulled him up alongside the boat on the handline, Ty gaffed him, lifting him up on the hook on the outside of the lifelines. I then took a knife, and while he was still hanging overboard on the gaff, I spiked his arteries, which are right behind the pectoral fin. We have ready that this is the easiest and most humane way to quickly kill a fish, and doing so while he was off the side of the boat kept the mess off the deck. We then put a line on him to hang behind the boat waiting to be filleted. The wind had filled in behind us, and we put the whisker pole up to help stabilize the headsail. Ad the day went on, the swells started to build a bit ahead of the weather we are expecting to come in over the next couple of days. Ty spotted a Laysan albatross soaring near us, along with the small flocks of petrels that have been hanging around. Around mid-day, we had another albacore on the line! This one was a bit small, probably just under 10 pounds. We performed the same gaff routine and hung him off the back of the boat for a bit before filleting him and filling up all of our containers and firdge with lots of fish. With our streak, we decided to keep the lines out, contemplating doing a canning session. For the time being, we were enjoying sesame seared tuna for lunch and poke bowls at dinner.
Towards evening the wind began to die off a bit, and we started some uncomfortable rolling in the swells, with the sails flopping back and forth. In the middle of the night, we put the whisker pole back up ( we had taken it down in the afternoon when the wind came around more in front of us) and this seemed to stop a bit of the rolling and sail flopping. We are feeling like we are on the downhill stretch now, and with stronger winds expected over the next few days, we’re hoping for a nice boost towards our destination. All the best, wishing we could share some of this delicous tuna we’ve been feasting on! Cheers, Hillary & Ty