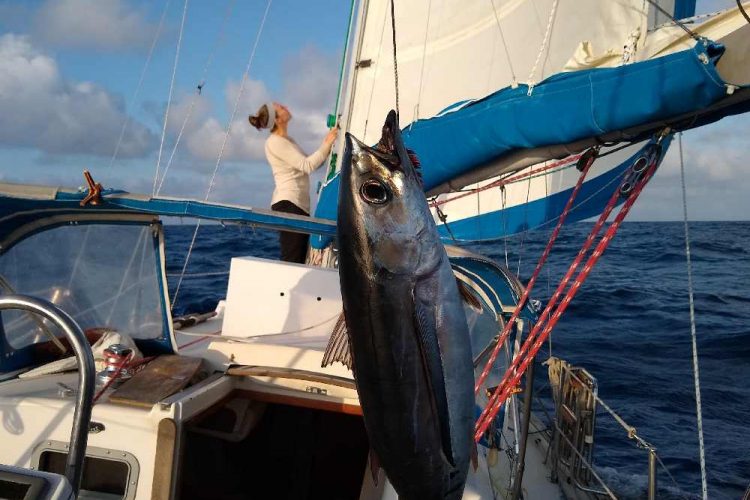 Current position as of 0000 UTC July 28th is 47° 52’ N 131° 09’ W Current Heading: 60°M Total distance made good (DMG) = 2278 nm DMG last 24hrs (0000UTC-0000UTC) = 127nm Engine hours = 0 Avg true wind speed (TWS) = 13 kts Avg speed over the ground (SOG) = 5.4 kts Avg swells = 4.8 ft Recap of Day 23 The started just as rocky as the last few, with the big, steep, and somewhat irregular swells rocking Varuna back and forth like a cork. However, over the course of the day the swells began to slowly die and became a bit more consistent. Just as our weather charts predicted, the wind came around more westerly, rather than southwesterly throughout the day as well. We enjoyed sunshine and blue skies for most of the day, taking advatage of the free power from the sun to run our little blender to blend up some tuna for fish cakes, which were delicious. Unfortunately, we discovered a bad egg amist the dozen we have left while making the fish cakes, and had to throw a bit of the tuna out. After this I did the “float test” on the rest of the eggs, and they all passed (they should not float, if they float they are bad). We have been running our little propane heater off and on for a few hours everyday the last several days to help take the chill out of the boat and to help dry towels and cloths. Today we finished off our first 10 pound propane tank, switching over to our second one that we filled before leaving Honolulu. We put the fishing lines back out, down to just 2 containers of albacore in the freezer, hoping that maybe we were in salmon territory, but alas, not long after the cedar plug was out, we had another albacore on the line, which Ty managed to bring in and kill all by himself while I napped! Before the sun went down we ended up taking the whisker pole down, as the wind was starting to come around more out of the northwest, putting us on a beam reach and also shook a reef out of the mainsail. There were 2 ships that showed up on AIS, though they never came close enough to get all their data. We feel like we should start seeing more shipping traffic soon as we appraoch the coast. I was just looking back over our reports from the passage with Makara, and amazingly, our mileage to date is almost identical! On Day 23, we had completed 2274 miles in Makara, and today, on this passage’s Day 23 we have sailed 2278 miles in Varuna! Although last time, we had less favorable winds and were several degrees further north and west on Day 23. We are still hoping to arrive to the entrance to the Straights of Juan de Fuca on Monday, and are eagerly awaiting landfall! All the best from us! Cheers, Hillary & Ty