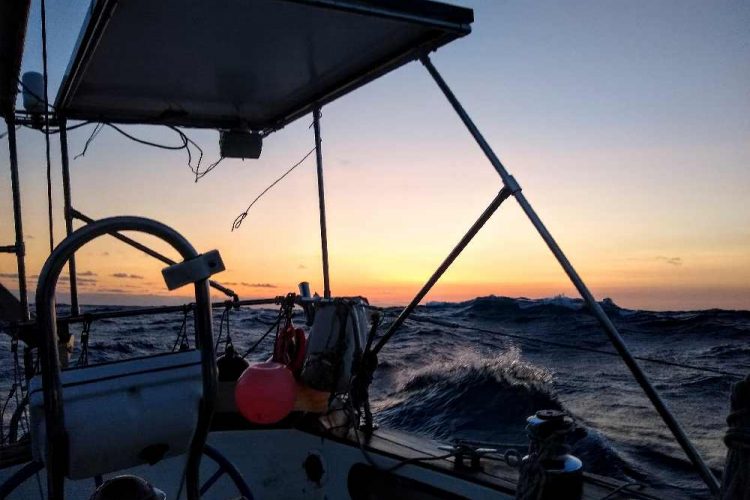 Current position as of 0000 UTC July 30th is 48° 25’ N 124° 39’ W Current Heading: 75°M Total distance made good (DMG) = 2542 nm DMG last 24hrs (0000UTC-0000UTC) = 127 nm Engine hours = 7 Avg true wind speed (TWS) = 21 kts Avg speed over the ground (SOG) = 5.7kts Avg swells = 7.5 ft Recap of Day 25 The morning of Day 25, the winds that had started to pick up the night before continued to build, and we decided to put a second reef on the main to go with our partially furled genoa. This ended up being a smart move, because throughout the day, the wind and swells only continued to build. There was a strong Northwesterly blow coming through and with the heading we needed to maintain in order to make the entrance to the straights of Juan de Fuca we needed to sail on a beam reach. By afternoon, we furled away the genoa and switched to the smaller staysail instead. By evening, the swells were about 8 feet, with some much larger ones mixed in and very close together, only about 6 to 8 seconds apart and winds 25 to 30 knots. Sailing on a beam reach, we were taking these waves directly beam-on, which was not ideal. At one point, when we were both below, we had a huge wave crash into the side of Varuna, shaking the hull, sending water shooting through the shut portlight and filling the cockpit with water. We tried out some different headings to take the waves a bit better, but with the wind/wave direction we didn’t have a lot of options since we needed to continue making a little bit of North progress in order to not end up south of the entrance to the straights. We tried sailing close-hauled or even foreaching for a bit, which slowed us down and allowed us to head a little ways north, but we were still pounding into the waves. After several hours of this, we turned back and were able to take the wind and swells just behind the beam. It was a miserable night, and neither of us got much sleep. The weather forecast had called for it to settle down slightly to 18 to 20 knots and for the winds to shift more westerly in the morning. To our surprise, come morning, the winds died off significantly more than expected. With 10 knots or less of wind behind us, we put away the staysail, put the genoa out on the whisker pole and shook out the reefs in the main. The sun was out and we found ourselves surrounded by birds of all kinds, different types of gulls and other north Pacific species that were unfamiliar to us. Later in the morning, the wind died completely, and we started the engine. And although things were settling down, there were still large remnant swells from the previous night, so keeping the boat moving helped to minimize the rocking. Around midday, I made our first sighting of land! Cape Flattery and the hills of the Olympic Peninsula peaked out from the mist and clouds, a beautiful sight! As we neared the entrance to the Strait of Juan de Fuca, a bit of a breeze filled in behind us, we killed the motor and we are now sailing on in! Although we haven’t officially made landfall, being inshore sure makes it feel like we have completed the passage. We haven’t decided on where our first stop will be yet, but plan to sail through the night up the Straight. This will be our last blog post of the trip, but we will post when we officially make landfall! A huge thanks to everyone out there who has been following along on our updates and commenting. Your support and encouragement are amazing. Cheers to all from the PNW! Hillary & Ty

One thought to “Fighting to the Finish”